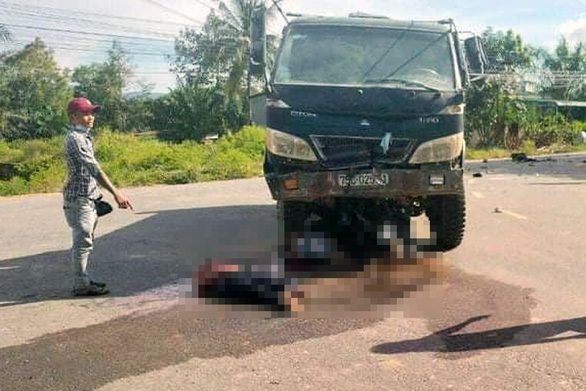 A dump truck killed three people and injured another traveling together on a motorbike without wearing helmets after a head-on collision in the southern Vietnamese province of Dong Nai on Thursday afternoon.

Police in Dong Nai’s Xuan Loc District said on Friday evening that they have arrested Nguyen Dinh Cuong, a 34-year-old driver, to investigate his violations when participating in road traffic.

While steering the dump truck numbered 75C-025.61 on Soc Ba Buong Street to transport construction rocks on Thursday afternoon, Cuong made the truck trespass on the opposite lane and collide head-on with the motorbike numbered 60V9-9300.

The strong crash killed Ha, Hai, and Truong on the spot while Sang sustained severe injuries that required hospitalization.

The Xuan Loc District police and related units examined the scene and conducted an autopsy to investigate the traffic accident shortly after.

Driver Cuong surrendered to the police later and confessed to causing the fatal accident.

Cuong was able to present all relevant documents and his driver’s license upon the functional force’s request.

He tested negative for drugs and alcohol.

Only the vehicle inspection certificate of the dump truck had expired.

Police officers determined that the four victims had been drunk driving, not wearing helmets, and carried more than the specified number of passengers when participating in road traffic on motorbike.

The officers also initially verified that Cuong was wrong for making the truck encroach the opposite lane.