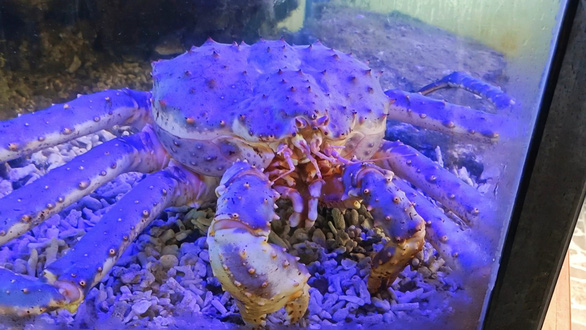 A rare purple-colored king crab caught in Norway has been exhibited at Nha Trang’s Oceanographic Museum in the south-central Vietnamese province of Khanh Hoa.

The museum received the king crab from the Royal Seafood supermarket in Thu Duc City under Ho Chi Minh City on November 2 for research and exhibition purposes, according to Truong Si Hai Trinh, the museum’s head of environmental education and communication.

The supermarket had imported the rare sea creature from Norway previously.

The crab, which weighs about 2.8 kilograms and has a purple hue, is growing well in a tank at a temperature of five degrees Celsius and is fed seaweed and small fish.

The care of the purple king crab is monitored and recorded daily.

Experts at the Institute of Oceanography in Nha Trang’s Oceanographic Museum are studying the crab over its rare color, according to Trinh.

King crabs of purple color are found once in a purple moon, according to the expert, so it is possibly the effect of a mutation that caused the crab to turn purple, similar to another one found in Alaska, the U.S. in 2014.

“It’s safe to say that it took nearly eight years for us to see another purple king crab, out of less than five times in the world record,” Trinh claimed.

The purple king crab, whose scientific name is Paralithodes, is a species often found in the North Pacific or Alaskan waters, according to Dao Tan Hoc, a crustacean expert at the Institute of Oceanography.

The majority of king crabs on the market are red king crabs, or Paralithodes camtschaticus, also native to the North Pacific or Alaskan regions.

In addition, in this distribution area, there is also a species of blue king crab, or Paralithodes platypus, with outstanding blue-violet color.

Unlike red king crabs that breed every year, blue king crabs are less common, as they only breed once every few years.

“The exact species of this crab has yet to be determined,” said Hoc.

“It is difficult to determine whether the cause of the purple color on this individual crab is normal or abnormal.”