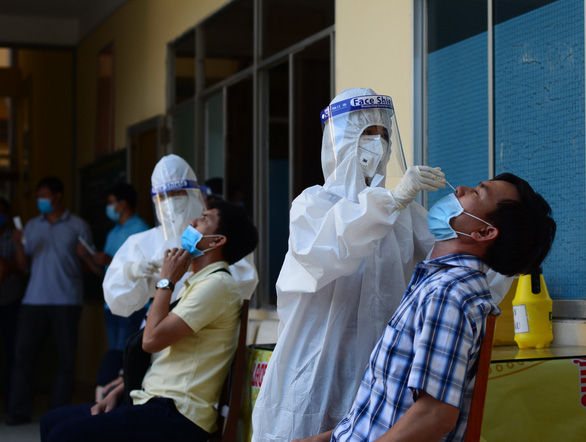 One of the infected cases had traveled on a fishing boat from Phu Quy Island to Ca Na Port in the neighboring province of Ninh Thuan to sell goods, according to the initial epidemiological investigation.

That person returned to the island on Thursday and took three rapid antigen tests, all of which showed positive results for the coronavirus.

The local COVID-19 prevention task force convened a meeting following the provincial Department of Health’s announcement of the transmissions, according to Ngo Tan Luc, deputy chairman of the island district.

The newly-detected infections were the first community-based cases in the island since the pandemic hit Vietnam early last year, according to the local authorities.

Phu Quy Island, covering an area of about 17 square kilometers, is located about 56 nautical miles from the mainland of Binh Thuan Province and can be accessed by an 2.5-hour trip by express boat.

The island consists three communes of Tam Thanh, Ngu Phung, and Long Hai, with a total population of about 28,000 people.

Currently, functional forces require a certificate of rapid antigen COVID-19 testing with negative results for all arrivals in the island as one of the pandemic prevention measures.

The operation of express boats between Binh Thuan’s Phan Thiet City and Phu Quy Island has also been halted from Saturday until further notice.

Vietnam has found 1,009,879 infections since the COVID-19 pandemic first hit it early last year, including 1,004,879 community transmissions in all of its 63 provinces and cities since the fourth virus wave broke out in late April.

Health workers have administered more than 97.9 million vaccine doses since inoculation was rolled out nationwide on March 8, with over 32.8 million people having received two injections, as of Friday.

In this new bout, Binh Thuan has documented 8,140 infections and had nearly 87 percent of its adult population injected with first vaccine doses.

The number of daily new cases has surged in the south-central province over the past week.