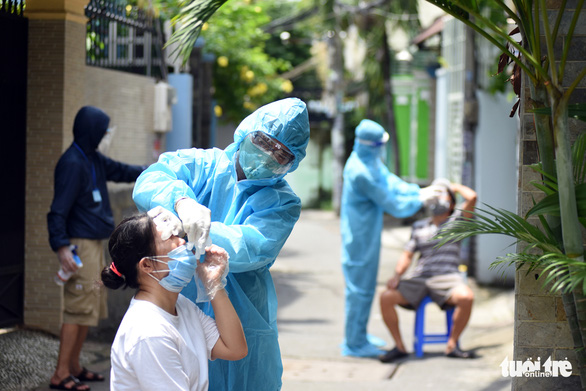 Close to 100 million COVID-19 vaccine doses have been administered in Vietnam so far, with 90 percent of the adult population having got at least one shot, according to the Ministry of Health.

As of Sunday morning, health workers have given more than 99 million vaccine doses, the ministry said, adding that the number will reach 100 million today.

About 90 percent of those aged 18 and above were given at least one injection while 45 percent of them were jabbed twice.

Health authorities have administered the first shot to 1.2 million children aged 12-17 as yet.

An initial assessment by the health ministry shows that 97.5 percent of those vaccinated produced antibodies whereas most fully-inoculated people exhibited mild symptoms when catching the coronavirus.

Nobody fully immunized with AstraZeneca vaccine has died of COVID-19 but one getting two Pfizer-BioNTech jabs passed away with many underlying health conditions after being infected with the virus, according to the assessment.

Deaths have been recorded among people who had got the two-dose regimen of other vaccines, a source told Tuoi Tre (Youth) newspaper.

Vietnam has documented 1,013,330 community-based transmissions in all its 63 provinces and cities since the fourth virus wave emerged on April 27, according to the health ministry’s statistics.

A total of 855,237 of them have recovered from the respiratory disease.

The death toll has climbed to 23,018 after the ministry announced 88 more deaths on Saturday.