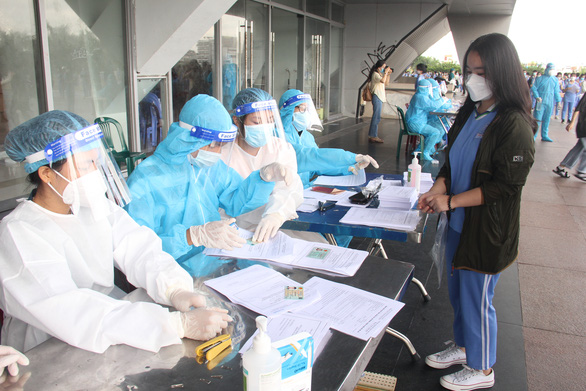 Authorities in Da Nang announced on Tuesday a plan to organize a walk-in injection point where anyone in eligible age groups can come and get vaccinated against COVID-19.

The city registered 65 new infections on Tuesday, its highest daily record in the past two months, according to the municipal Steering Committee for COVID-19 Prevention and Control.

Previously, the People’s Committee of Da Nang agreed to adjust the mass testing period between December 14 and 16 to between Monday and Wednesday.

The main subjects in this testing round include establishment owners, managers, receptionists, service staff, kitchen staff, parking attendants, loading and unloading staff, and delivery staff of all restaurants, markets, and Tho Quang fishing port in the central Vietnamese city.

Ngo Thi Kim Yen, deputy chairwoman of Da Nang, said the municipal statistics showed that the number of COVID-19 vaccine doses allocated to the city is temporarily enough for the remainder of this year.

Functional forces are preparing identifiers for children from 12 to 17 years old so that they can get vaccinated soon, according to Yen.

Yen also requested the municipal Department of Health establish a walk-in vaccination site for anyone in eligible age groups to come and get injected.

“After the organization is completed, the venue will be widely announced in the mass media so that people can come to receive injections,” said Yen.

“This injection point will be arranged in a convenient place and operating daily.”

The deputy chairwoman added that district-level authorities are reviewing the second-dose injections for people over 50 years old.

Da Nang has reported 5,532 COVID-19 cases since the fourth wave started in Vietnam on April 27.

As of Tuesday, the central coastal city with a population of nearly 1.2 million had administered more than 1.5 million vaccine doses, according to the national COVID-19 vaccination portal.

Vietnam has found 1,143,967 infections since the COVID-19 pandemic first hit early last year, including 1,138,836 community transmissions in all of its 63 provinces and cities since the fourth wave flared up.

Over 43.5 million out of the 98-million people in the Southeast Asian country have been fully inoculated against the coronavirus, according to the national COVID-19 vaccination portal.