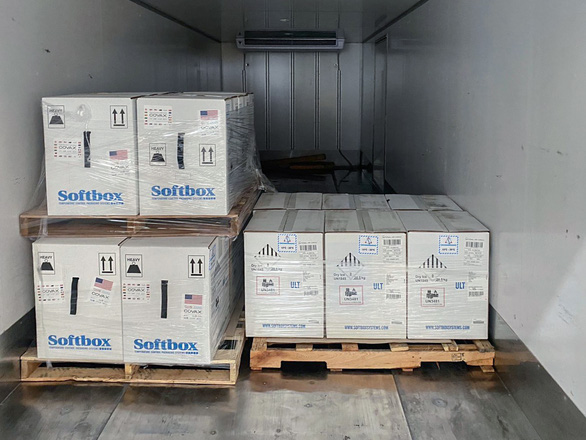 The United States has given Vietnam over two million more Pfizer-BioNTech vaccine doses, bringing its total vaccine donations to the Southeast Asian country past 20.5 million shots.

This latest shipment followed 2,074,410 doses of the same vaccine which were sent to Hanoi on Friday.

“We will keep working with Vietnam as a trusted partner to beat back COVID-19,” the embassy said, adding the total vaccine donations from the U.S. have surpassed 20.5 million jabs.

Based on their long-term cooperative relationship, the two countries have worked together to improve Vietnam’s capacity in response to the COVID-19 pandemic, the embassy said.

Along with nearly US$1 billion provided to Vietnam over the past years for health infrastructure development, the U.S. has also committed $26.7 million as support for Vietnam to deal with the pandemic.

Last month, the National Institute of Hygiene and Epidemiology in Hanoi received 77 of the 111 deep freezers for storage of Pfizer-BioNTech vaccines funded by the U.S. government for Vietnam through the U.S. Department of Defense.

U.S. President Joe Biden in September pledged to provide 500 million more doses of Pfizer-BioNTech vaccine to 92 low- and middle-income countries around the world and the African Union, lifting its total global commitment to more than 1.1 billion doses.

“Vietnam has been a leading recipient of these doses,” the embassy said in a media release.

As of November 21, the U.S. had delivered more than 264 million vaccine doses to over 110 countries, according to the U.S. Department of State.

Besides the U.S., the largest donor of COVID-19 vaccines to Vietnam so far, the Southeast Asian country has received vaccine donations from other countries, including Japan, Australia, the UK, France, Italy, Russia, the Czech Republic, and China, among others.

The nation has received around 140 million doses of COVID-19 vaccines out of the 200 million shots that had been contracted.

Vietnam’s health workers have administered about 69.3 million first vaccine doses and 48.3 million second shots since immunization was rolled out on March 8, according to official figures.

At the current vaccination pace, the country will likely cover 70 percent of its population aged 18 and older with two full doses by the year end, the Ministry of Health said.

The Southeast Asian country has recorded 1,197,404 patients, including 956,924 recoveries and 24,692 deaths, since the pandemic hit it early last year, the health ministry’s data shows.