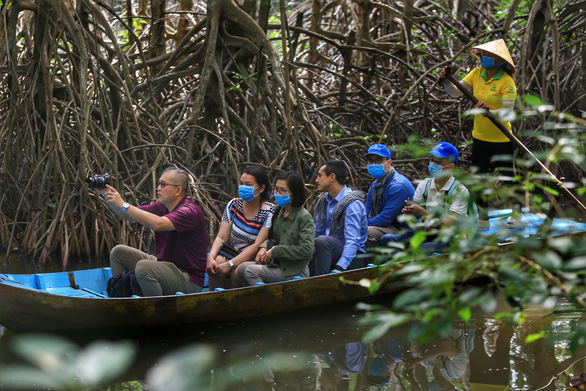 -- Barriers were erected on many alleys and streets across Hanoi to zone off areas at high risk of COVID-19 transmission on Sunday afternoon as the Ministry of Health added 455 new infections to the city’s daily count.

-- The Vietnamese economy is estimated to rack up a US$37 billion loss due to the COVID-19 pandemic by the end of this year, Nguyen Thanh Phong, deputy head of the Party Central Committee’s Economic Commission, said at a forum discussing economic recovery measures in Hanoi on Sunday.

-- Eleven sailors and their fishing boat which had been drifting off the central province of Quang Tri for nearly a day were brought to safety by rescuers from the Vietnam Maritime Search and Rescue Coordination Center (Vietnam MRCC) on Sunday morning, according to the Vietnam News Agency.

-- More than 70 percent of first graders’ parents in Ho Chi Minh City do not want their children to return to offline classes under the city’s pilot phase of school reopening in the context of safely living with the COVID-19 pandemic, according to a survey conducted by the municipal Department of Education and Training.

-- Hanoi education authorities changed their minds on Sunday, allowing only 12th graders to resume offline learning from Monday, instead of 10th, 11th, and 12th graders as previously planned, due to a surge in COVID-19 cases in the capital city in recent days.

-- Vietnam will play their opening match in Group B of the delayed 2020 AFF Suzuki Cup against Laos at Bishan Stadium in Singapore at 7:30 pm on Monday. The game will be broadcast live on Vietnam Television’s VTV5, VTV6, and OnSports channels.

-- Hosts Singapore saw off Myanmar 3-0 at the National Stadium, while Thailand beat Timor Leste 2-0 in Group A of the 2020 AFF Suzuki Cup on Sunday night.

-- The Football Association of Malaysia (FAM) confirmed on Sunday night that two Malaysian players present in Singapore for the 2020 AFF Suzuki Cup had tested positive for COVID-19.