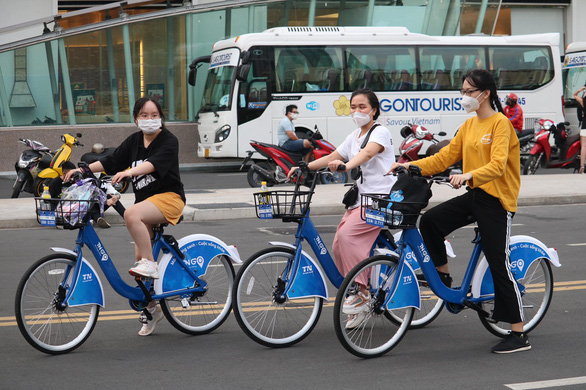 Ho Chi Minh City officially introduced a public bicycle rental service in District 1 on Thursday morning on a trial basis, after a seven-month halt due to the COVID-19 pandemic.

The southern city’s administration on Wednesday granted approval for the service to be piloted at 43 stations in the district, after one of such locations opened to the public on Le Loi Street on December 3 as a pre-trial operation.

These stations, covering 10 to 15 square meters each, are situated on the sidewalks of many streets and are close to local bus stops, parks, and popular tourist destinations.

Do Ba Dan, chairman of Tri Nam Group JSC, the investor of this bike rental model, said 500 bicycles had been imported for this project, whose trial phase is expected to last one year.

Of the bikes, 388 have been put to use at the 43 stations and the rest are kept as standby vehicles.

The bicycles are equipped with smart locks, GPS systems, 2G, 3G, and 4G networks, Bluetooth, a distinctive number plate, as well as front baskets and headlights.

People are required to install the Mobike app on their smartphones and fill out personal information to use the rental service.

The app allows users to locate the nearest station and select the time they would like to rent the bikes.

After paying rental, customers will be provided with a QR code to unlock a bicycle.

Service users will be given free-of-charge tickets for their first 15 minutes of bicycle use in an initial stage of this period, the investor stated, without mentioning how long this stage is.

It also said other ticket types will be made available in the coming time.

Nguyen Van Thanh, a local resident, believed that the service would offer a good means of transport for people to travel in downtown areas.

It will help minimize the use of motorbikes, reduce travel cost, and protect the environment, Thanh said.

As part of the city’s plan to promote public transport and limit personal vehicle use in downtown areas, the bike rental service had been scheduled to begin in April but was postponed due to the eruption of the severe fourth wave of the COVID-19 pandemic in Vietnam.

The service trial has now been launched as the whole country has basically put the pandemic under control and reopened the economy following the strategy of living safely with the coronavirus since early October.