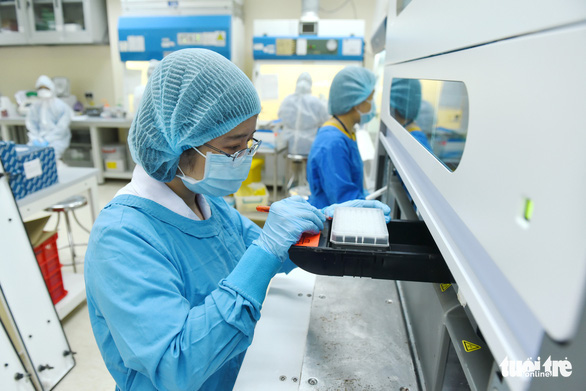 Ho Chi Minh City has documented 17 more infections of the Omicron coronavirus variant, bringing the total Omicron cases detected so far in the city to 30.

The latest patients are Vietnamese returning from abroad and they have been put in quarantine at Field Hospital No. 12 in the city’s Thu Duc City upon their arrival, the municipal Department of Health reported on Saturday.

All these 17 cases had no common COVID-19 symptoms, such as fever, cough or difficulty breathing, the agency said.

Among the previous 13 imported Omicron cases, 12 have been discharged from hospitals and the other, an 82-year-old woman with some underlying health conditions, is being treated at the Ho Chi Minh City Hospital for Tropical Diseases.

Nationwide, 68 imported Omicron patients, all Vietnamese, have been detected in different localities since the first case was confirmed in Hanoi on December 21 last year.

Ho Chi Minh City leads in Omicron cases with 30 infections, followed by Quang Nam with 27 cases, Da Nang with three, Thanh Hoa and Khanh Hoa with two each, and Hanoi, Hai Duong, Hai Phong and Long An with one each, according to the the Ministry of Health.

The Omicron mutant was designated by the World Health Organization (WHO) as a variant of concern on November 26, 2021, two days after it was first reported to the WHO by South Africa.

The strain, which health experts stated appears to be more contagious but less virulent than previous mutants, has now been reported in over 130 countries and territories and has become dominant in many places, according to international media.

The health ministry said it has been updating information about the Omicron strain from the WHO in order to cope with any new epidemic developments properly and timely.

Ho Chi Minh City, with some nine million inhabitants, had administered over 8.14 million first vaccine shots and some 7.33 million second jabs to its adult population as of Saturday, the national COVID-19 vaccination portal reported.

Local health authorities expect to give the third vaccine doses, including booster shots and additional primary jabs, to all people aged 18 and older by January 30, according to Nguoi Lao Dong (Laborer) newspaper.

The city has recently seen its daily COVID-19 cases and deaths fall sharply, to 364 and 16 on Saturday, compared to 1,270 and 74 a month earlier, the Ministry of Health’s data shows.

However, the southern economic hub remains the locality suffering the most from COVID-19 in Vietnam, with 512,368 infections and 19,797 fatalities documented since the pandemic erupted in the Southeast Asian country in early 2020.