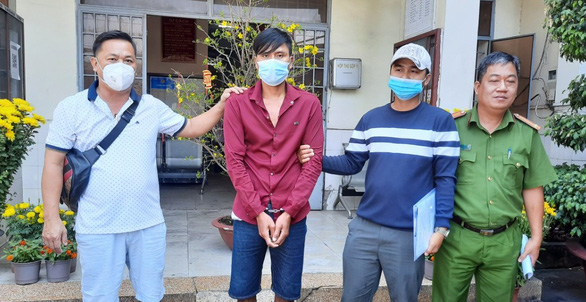 A man from the Mekong Delta province of Kien Giang has been arrested for setting his boss's house on fire, resulting in the total destruction of at least 11 fishing boats and other valuable properties.

According to preliminary investigation, Pham Thi Hue Chi is the owner of several fishing boats at Ba Hon Port in Kien Luong District, Kien Giang, where Sang was hired a day laborer.

At 8:00 pm January 28, Sang went to Chi’s house to demand a cash advance in order to purchase stuffs for the upcoming Lunar New Year holiday and reclaim his motorcycle, which had been used as a colleteral at a pawn shop.

Chi, on the other hand, refused to lend him more money because the suspect still owed her a substantial amount of unpaid debts.

Sang became enraged and asked for assistance from his accomplice, Huynh Kim Gia Luat, in buying a can of gasoline and a lighter.

He then poured gasoline onto Chi’s house and set it on fire.

Due to the large amount of oil stocked in the house in preparation for the upcoming fishing trips, the fire quickly spread to neighboring houses and then numerous fishing boats docked at Ba Hon Port.

According to Tuoi Tre (Youth) newspaper, the fire burned at least 11 fishing boats, damaged many properties and two temporary houses, as well as scorched three other adjacent houses.

Chi owns seven boats and a house among the damaged properties.