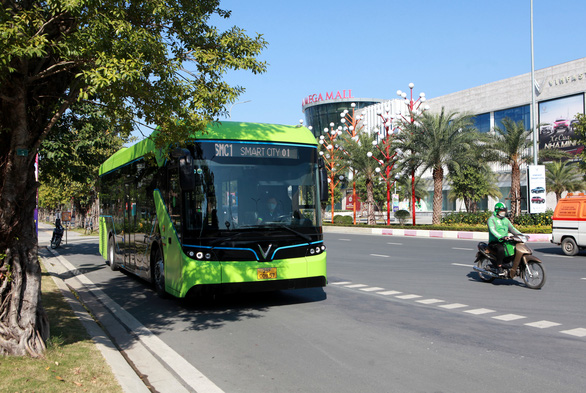 The first electric-bus route in Ho Chi Minh City is scheduled to open within the first quarter of this year, the municipal People’s Committee has said.

Named VB03, the 29-kilometer route will start from Vinhomes Grand Park, an apartment complex, in Thu Duc City and end at Saigon Bus Station in District 1.

Four other electric-bus routes under the same operator, Vinbus Ecology Transport Services Ltd. Co., a subsidiary of Vingroup, are expected to come on stream in the third quarter of this year.

The operation of the five aforementioned bus lines comes under a trial program recently approved for a duration of two years by the municipal governing body.

Seventy-seven electric buses would be used, with a capacity of 65-70 passengers.

The municipal People’s Committee said the services will receive a subsidy of 44.1 percent of the operation cost during the trial phase, and the rate will be adjusted after the municipal administration issues technical norms and unit cost for electric buses.

Previously, the city has piloted three 12-seater electric bus routes serving tourists in District 1 and residents of Phu My Hung New Urban Area in District 7. Most recently, city authorities approved the operation of electric cars under 15 seats for contractual tourism activities in Can Gio District.

Hanoi launched its first electric bus service in December last year on three routes, with a bus coming every 10-15 minutes.