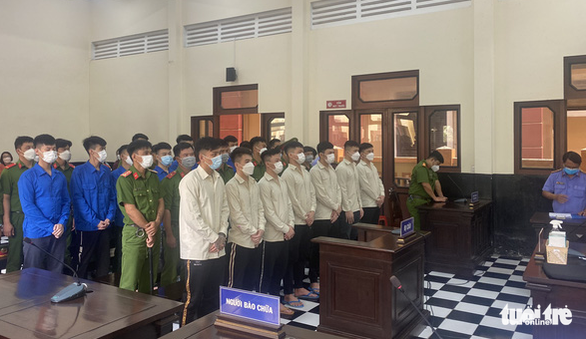 22 imprisoned over shootout at karaoke parlor in Vietnam

Twenty-two people have been put behind bars due to their involvement in a shootout at a karaoke lounge that left one dead and three injured in Vietnam last year.

The People’s Court in southern Tien Giang Province announced the sentences for the 22 defendants on Thursday following a three-day trial.

Nguyen Thanh Trieu, also known as ‘Crazy Trieu,’ a 24-year-old resident of My Phong Commune, located in the provincial capital of My Tho, was given a five-year sentence for deliberately inflicting injury and the second sentence of life behind bars for murder.

The remaining 21 defendants were sentenced to two to seven years in prison for purposely inflicting injury and disrupting public order.

Thach Trung Nghia and Duong Minh Nhut made plans to meet at X.O. Karaoke Lounge in Dao Thanh Commune, My Tho City on March 17, 2021 to settle a conflict, according to court documents.

At about 12:30 am that day, while Nghia, Trieu, Thach Minh Quan, Luong Van Hoa, Tran Quang Quoc Bao, Huynh Ngoc Dinh, and Nguyen Hai An were singing karaoke on the first floor of X.O. Karaoke Lounge, Nguyen Thanh Hai, a 33-year-old resident of Ward 2 in My Tho, along with Nhut and six others, visited the karaoke parlor to fight Trieu.

Bao called Le Duc Phu to the karaoke lounge to join the fight.

Phu then gathered nine others and brought knives and guns to the karaoke parlor where they attacked Dinh Tuan Kiet with a knife.

Bao shot Kiet during the confrontation, but the latter survived his injuries.

Pursuant to Article 123 of the amended 2015 Penal Code, a murderer shall face a prison term of 12-20 years, life imprisonment, or the death penalty if the murder is organized or of ‘gangster-like’ nature.

Article 134 of the Penal Code stipulates that a person who deliberately inflicts injury on another person and causes a physical disability of 11-33 percent shall be put behind bars for two to five years.

Meanwhile, any person who disrupts public order shall be condemned to two to seven years in prison if the offense is organized or involves the use of weapons or vandalism, pursuant to Article 318.