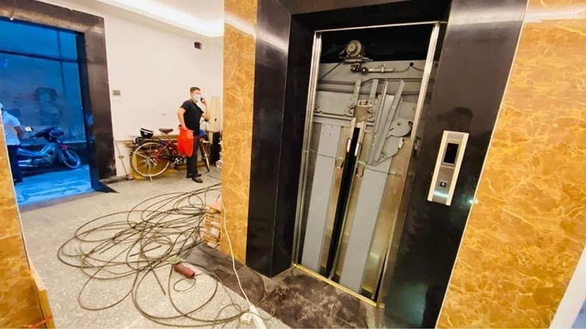 The elevator in a seven-story building in Hanoi suddenly fell several floors on Wednesday, killing two technicians who had been trapped inside, local police reported.

The incident occurred at 5:00 pm at a building on Kim Ma Street, Ngoc Khanh Ward, Ba Dinh District while the house was being repaired, said the city’s fire and rescue squad.

The elevator fell from the sixth floor while being repaired by two technicians who had been trapped inside, police said.

One of the men died immediately while the other succumbed to his wounds on the way to the hospital.

According to initial reports, the elevator cable likely broke during the repair.

The names of the two technicians have yet to be announced, the Vietnam News Agency reported.

The Ba Dinh District police are investigating the cause of the accident.

Last month, a local fire and rescue squad successfully saved a four-year-old boy and a man who had been trapped inside the shaft of an under-repair elevator in a residential house in Nam Tu Liem District.

The boy fell down the elevator shaft from the sixth floor of the building and was only saved by his shirt snagging a nail on the fourth floor.

The man then tried to go into the shaft to save the child, but wound up being trapped as well.