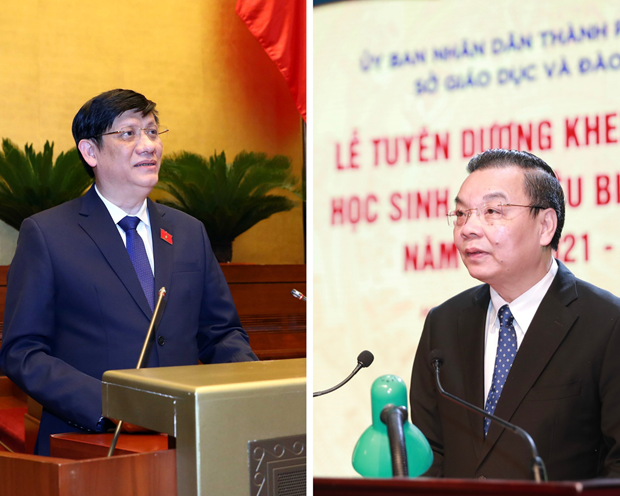 Vietnamese Deputy Minister of Science and Technology Pham Cong Tac has been expelled from the Party while Hanoi City's chairman and the health minister are facing disciplinary actions for their serious mistakes related to the COVID-19 test kit scam at Viet A Technologies JSC.

The Party expulsion and disciplinary requests were released at a meeting of the Vietnamese Politburo and the Secretariat of the Party Central Committee on Saturday under the chair of Party General Secretary Nguyen Phu Trong, the Vietnam News Agency reported on Friday.

There are currently four levels of disciplinary actions for Party members: reprimand, warning, demotion and expulsion.

Tac, Anh and Long have degraded in political ideology, morality and lifestyle, violated the Party’s regulations and the State’s laws, resulting in severe consequences and heavy losses to the State budget, the Politburo and the Secretariat concluded.

Their wrongdoings, the Politburo said, have affected the COVID-19 prevention and control activities, causing discontent among the public, and undermining the prestige of the Party and the two ministries.

The Politburo also gave a disciplinary action of warning to the Party committees of the 2016-21 tenure at the ministries of Health, and Science and Technology for their violations of regulations and mistakes causing serious consequences.

The Politburo and the Secretariat also requested that relevant agencies impose administrative disciplinary actions against the organizations and individuals punished by the Party as aforementioned.

Earlier in late March, the Inspection Commission of the Party Central Committee concluded that the Party Committees and leaders of the two above ministries in the 2016-21 term had shown a lack of responsibility and loose management, resulting in wrongdoings and violations in relation to the price hiking of COVID-19 test kits at Ho Chi Minh City-based Viet A Technology Corporation, which was uncovered last December.

Viet A general director Phan Quoc Viet, who was arrested on December 19 last year, admitted he had directed his employees to overstate the prices of production equipment and input materials to hike the selling price of a test kit to VND470,000 ($20.23), or 45 percent higher than the original rate, to earn a difference of VND500 billion ($21.52 million).

Viet confessed to investigators that he had paid 'commissions,' in fact illegal kickbacks, worth nearly VND800 billion ($34.43 million) to his partners who bought his test kits at the inflated prices.

Preliminary investigation results determined that Viet A had supplied test kits to centers for diseases control (CDCs) and other medical facilities of 62 provinces and cities, raking in nearly VND4 trillion ($172.17 million).

To date, nearly 60 suspects including officials from the two above ministers, directors of CDCs, leaders of hospitals and health departments, and some high-ranking military generals, have been arrested or put under criminal investigation for their involvement in the striking case.