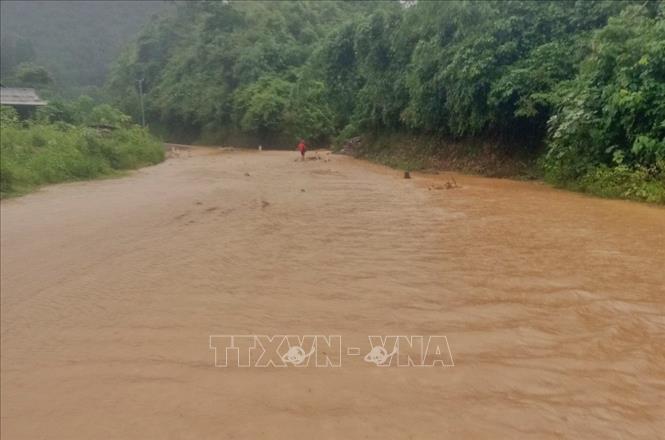 A person went missing, three others were injured, and a lot of damage was recorded after a heavy rain swamped the northern Vietnamese province of Dien Bien on Sunday morning, the Vietnam News Agency reported, citing the provincial committee for natural disaster prevention and control.

Rain started pouring down on Dien Bien at 6:00 am on Sunday and triggered a flood in Phi Linh Village, Nam Po District.

The flood swept through a hydroelectric tunneling site, where four workers were working, causing one to go missing and injuring the other three.

Rescuers arrived at the scene and gave first aid to the three injured workers shortly after, before transporting them to the nearby Muong Cha District medical center for further treatment.

The rescuers then began searching for the missing victim, who was believed to be stuck in the tunnel of the hydroelectric construction site.

The rain and flood also caused a landslide that destroyed auxiliary construction works of five houses in Na Nhan Commune, located in the provincial capital city of Dien Bien Phu, prompting an evacuation of those five households.

A mass of earth slid into another house in Muong Dang Commune, Muong Ang District, posing a high risk of further land collapse.

Many crops, fish ponds, and poultry barns were either buried or washed away.

Preliminary damage was estimated at more than VND6 billion (US$256,700).