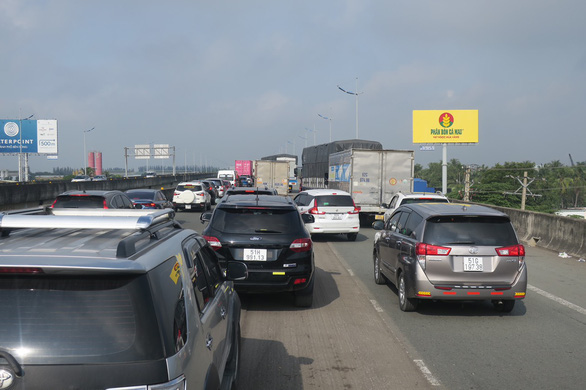 Ho Chi Minh City authorities have made a proposal to the prime minister for widening the Ho Chi Minh City - Trung Luong freeway by two more lanes to ease traffic jams on the route which links the city to two neighboring provinces.

In an urgent dispatch sent to PM Pham Minh Chinh on Tuesday, city chairman Phan Van Mai asked for permission to enlarge the motorway as it has failed to withstand the growing traffic density after 12 years of operation.

Specifically, the expressway needs to be expanded from the current six to eight lanes with an investment in the public-private partnership (PPP) form and a locality where the expressway passes through should be charged with carrying out this expansion project.

The 62km-long throughway, opened to traffic in 2010, now has four traffic lanes that allow vehicles to travel at a maximum speed of 120km per hour and two emergency stopping lanes, linking the city to southeastern Tien Giang and Long An Provinces.

Currently, the expressway is often congested, especially on weekends and holidays, failing to guarantee regional connectivity for socio-economic development, the city government said.

As planned, the road network in the Ho Chi Minh City area includes five expressways with a total length of about 276.9 kilometers, but only two of them, including the aforementioned one and Ho Chi Minh City - Long Thanh - Dau Giay, have been put into operation so far.