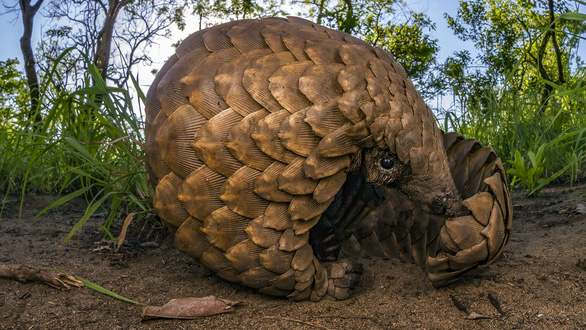 According to initial investigations, these Vietnamese nationals were high-ranking members of an organized crime group involved in the trafficking of ivory, pangolin scales, rhino horns and lion bones from Mozambique and South Africa through Nigeria to Vietnam, Nigerian daily Blueprint reported on Friday.

The names and other details of the three Vietnamese traffickers have yet to be announced.

The joint forces seized from the ring 397.5kg of pangolin scales, according to NCS.

The crackdown of this ring will help authorities to have more clues to expand the investigation of the illegal wildlife trade line, and at the same time identify other ring members.

This is the fourth largest wildlife seizure in Nigeria over the past year thanks to the coordination between NCS, WJC and the governments of some other African countries, Bomodi said.

Initial crackdowns in 2021 resulted in the confiscation by NCS of 7.1 metric tons of pangolin scales and 850 kilograms of ivory, he added.

They and their four accomplices, including two Nigerians, one Guinean and one Cameroonian, were arrested in May and June, which later led to the seizure of six metric tons of ivory, pangolin scales and other wildlife items in Port Klang, Malaysia on July 10.

As all defendants pleaded not guilty and sought bail, the justice remanded the defendants in an NCS facility and adjourned the trial until September 30.