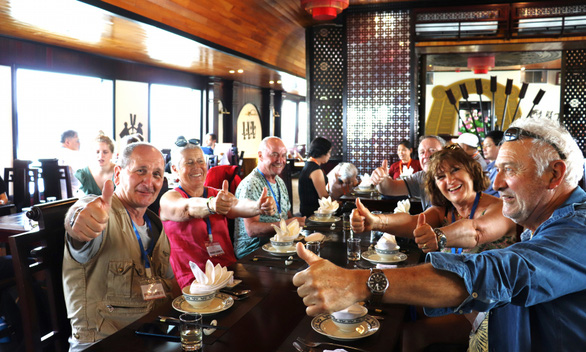 The number of international visitors welcomed to Vietnam from January 1 through August 29 topped 1.44 million, a 14-fold year-on-year increase but an 87 percent plunge over the same period in 2019, according to the General Statistics Office (GSO).

Visitors arriving by air accounted for 88 percent of the international arrivals to Vietnam in the time span, an 18-fold year-on-year rise.

Meanwhile, those entering the country by road and sea made up 11.8 and 0.03 percent of arrivals, respectively.

In August alone, the country welcomed 486,400 foreign guests, up 38 percent month-on-month and 52 times from the same period last year thanks to Vietnam having fully reopened international tourism and air routes.

The GSO also reported that revenues from lodging and catering services in the eight months amounted to VND377.8 trillion (US$16.2 billion), surging 48 percent year on year.

The high number of arrivals stemmed from the high demand for tourism and entertainment of residents during the summer travel season after a two-and-a-half year hiatus.

However, the revenue was equal to 48 percent of the figure posted the same period in 2019.

Tourists from other Asian countries took the lead in the total number of international arrivals during the January-August period with nearly 997,000 visitors, accounting for 69 percent of the total.

South Korea was the largest source market for Vietnam’s tourism, with the number of visitors from the East Asian country increasing 18-fold year on year.

Vietnam set a target to welcome five million international travelers this year, but it will need to actively employ more solutions to attract more foreign tourists.

The Vietnam National Administration of Tourism under the Ministry of Culture, Sports, and Tourism has proposed many solutions to remove obstacles and create favorable conditions to attract foreign visitors.

The administration suggested that the Ministry of Transport ask airlines to continue opening direct air routes to countries and territories which are the lucrative markets of Vietnam’s tourism.

The Ministry of Foreign Affairs should continue directing Vietnamese diplomatic agencies abroad to introduce and hold tourism promotion programs, connect enterprises with the country, and remain updated on the policies of Vietnam’s tourism competitors in the region so that Vietnam can make appropriate adjustments to its tourism promotion activities.

The 2017 Law on Overseas Representative Missions of Vietnam and related legal documents should be amended to pave the way for the establishment of Vietnamese tourism promotion offices abroad.

According to the Vietnam National Administration of Tourism, Vietnam has yet to open overseas tourism promotion offices, thereby putting it at a disadvantage compared with other regional countries.

However, the target of five million international arrivals this year seems unachievable as the country has only welcomed slightly over 1.44 million foreign guests in January-August.