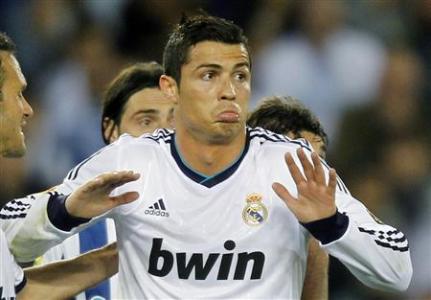 Real draw at Espanyol to hand Barca the title

Real Madrid gifted Barcelona the La Liga title when a second-string side could only draw 1-1 at Espanyol on Saturday to leave Tito Vilanova's leaders seven points clear with their rivals having only two games left.

Jose Mourinho fielded a weakened team with one eye on next Friday's King's Cup final against Atletico Madrid, Real's last chance for major silverware this season, giving the occasion a sense of anti-climax.

Cristian Stuani gave Espanyol the lead after 28 minutes, and although Gonzalo Higuain pulled one back for Real in the 58th it was not enough to stop Barca securing the league trophy.

Barcelona, who visit third-placed Atletico Madrid on Sunday, have 88 points with four games left to play. Real have 81 in second having played two matches more than their arch-rivals.

"First I want to congratulate Barcelona, their coaching staff, their players, directors and fans," said Real manager Mourinho. "They have won a league title which was ours until now and I think the least we can do is congratulate them."

Despite the La Liga crown being at stake, Real started with the likes of Cristiano Ronaldo, Xabi Alonso and Karim Benzema on the bench and mid-table Espanyol, who have little left to play for this season, sniffed the chance for an upset.

The game took a turn for the worse for Real when Raphael Varane fell awkwardly as he made a tackle and went down clutching his right knee.

The promising young French defender had to be substituted after 19 minutes, and in the 28th Stuani pounced on a loose ball in the area at a corner to fire the hosts in front.

Espanyol were unlucky to have a second goal ruled out soon after, while Real offered little going forward until Higuain flicked a header inside the far post from Luka Modric's freekick just before the hour mark.

The equaliser came two minutes after Real's leading scorer Ronaldo had entered the fray and the visitors steadily increased the pressure on the Espanyol goal although they rarely looked like finding the winner.

Espanyol had midfielder Victor Sanchez sent off at the end for a dangerous tackle on Higuain, giving Ronaldo a final chance to grab a winner with a freekick, but his attempt was high and wide summing up Real's dismal night.

"We didn't start the season well, and this meant we couldn't compete at the end. Now we have to focus on the Cup as it is a title we still have to compete for," Real Midfielder Xabi Alonso told Spanish broadcaster Canal Plus.

The day's other games all involved clubs fighting to avoid relegation, with Osasuna the only side in the threatened bottom six to win with a 1-0 triumph at home to Getafe.

Defender Alejandro Arribas headed in at a corner after 75 minutes to lift the Navarrans to 15th with 36 points, four above the relegation zone and 18th-placed Deportivo La Coruna.

The Galicians are two points short of the safety zone and 17th-placed Real Zaragoza, who drew 0-0 at Levante on Friday.

Depor are also a point ahead of regional rivals Celta Vigo in 19th and three in front of basement side Real Mallorca who have 29 points.

Mallorca were pushed closer to the second division when they went down 2-1 at Athletic Bilbao.

Bilbao striker Aritz Aduriz headed an early goal and the visitors were left a man down when defender Andreu Fontas was sent off for a handball in the area in the 24th.

Dudu Aouate gave the islanders hope by saving Aduriz's penalty only for home substitute Fernando Llorente to double the lead with a close-range volley in the 79th.

Mallorca's talented playmaker Giovani dos Santos put them back in the game with a superb freekick into the top corner two minutes later.

Gregorio Manzano's team were then reduced to nine men when defender Ximo Navarro was sent off at the end, but Dos Santos almost forced an equaliser in added time before the locals could breathe a sigh of relief.

Bilbao, last year's Europa League and King's Cup finalists, have all but mathematically assured their top-flight status in 14th with 41 points.