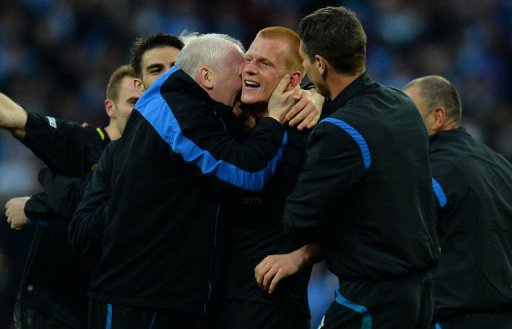 Substitute Ben Watson scored an injury-time winner to give Wigan Athletic a sensational 1-0 win over Manchester City at Wembley Stadium on Saturday in the biggest FA Cup final upset in 25 years.

With extra time beckoning, Watson met a Shaun Maloney corner with a near-post header to stun 2011 cup winners City and give Wigan the first major trophy in their 81-year history.

Victory represented a fairytale moment for the modest northwest club and their chairman, Dave Whelan, who punched the air with delight at the final whistle, after a shock that stands comparison with Wimbledon's 1988 success over Liverpool.

He had earlier led the team onto the pitch, having broken his leg while playing for Blackburn Rovers in the 1960 FA Cup final in an incident that ended his top-level football career.

Beneath driving rain, Wigan manager Roberto Martinez celebrated with his players on the pitch, as the Latics temporarily forgot their perilous fate in the Premier League, where they are on the brink of relegation.

"You could see the goal coming -- the performance was magnificent. We deserved it," said Martinez.

"You dream of playing at Wembley and winning. The underdogs played with incredible bravery and belief and fought the odds again. That's the FA Cup."

Watson said: "Unbelievable. The boys were fantastic and they deserve it. To come on and score the winner in the FA Cup final is a dream."

Watson's goal completed a miserable season for City and their manager, Roberto Mancini, who awoke on Saturday to media reports that he is about to be replaced by Malaga manager Manuel Pellegrini.

League champions last year, City will finish the season without a trophy after being burnt off by Manchester United in the league and crashing out of the Champions League in the group phase.

"I don't think that we played a good game," said Mancini. "It's unusual for us because in a final, you (usually) play better. I don't think we played our football."

The Italian flatly dismissed the rumours about his future.

"It's rubbish, this speculation," he told ITV. "I will still be here next season. It is rubbish. I am very sorry for our fans."

City were overwhelming pre-game favourites but Mancini showed how seriously he was taking the game by starting with Joe Hart in goal, despite having previously vowed to persevere with deputy Costel Pantilimon.

Wigan welcomed back Antolin Alcaraz following a hamstring problem, but Maynor Figueroa, Ivan Ramis, Ronnie Stam and Jean Beausejour all missed out out through injury.

True to expectations, City started on the front foot, with Wigan goalkeeper Joel Robles forced to parry a dipping Yaya Toure half-volley in the fourth minute after Carlos Tevez hit the wall with a free-kick.

Wigan refused to be cowed, however, and City soon found themselves on the back foot.

Callum McManaman should have done better than curl wide from seven yards after cutting inside Matija Nastasic from Arouna Kone's sweeping pass, while Gareth Barry had to produce a carefully timed challenge on McManaman right on the edge of the City area.

It was not until the 29th minute that City showed signs of life as an attacking force, with Robles narrowly diverting an effort from a sliding Tevez over the bar with his foot following a cut-back by David Silva.

City ended the half strongly, with Robles saving from Barry and then springing to his left to fist away a well-struck curler from Nasri.

Mancini's men remained on the front foot in the second period and Emmerson Boyce had to produce a timely block to prevent Aguero from turning in Tevez's low cross at the near post.

Mancini introduced James Milner and Jack Rodwell from the bench and the pair nearly combined for the opener in the 72nd minute when Rodwell got his head to Milner's free-kick, only for Robles to save.

Wigan had been subdued, but with 15 minutes to play, Maloney almost broke the deadlock with a cunning free-kick from wide on the right that bounced off the top of the bar.

Wigan were given further reason for optimism in the 84th minute, when Pablo Zabaleta was shown a second yellow card for felling McManaman as he bore down on goal.

Maloney whipped the resulting free-kick wide, but Wigan had the momentum and in the first minute of injury time, Watson glanced Maloney's corner past Hart to write his name in cup final history.