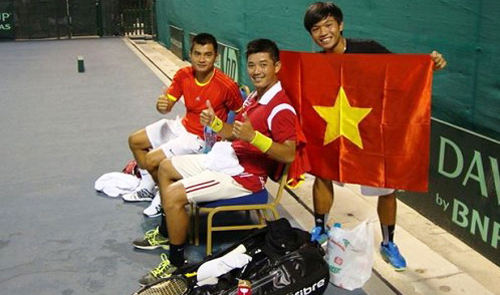 The national men’s tennis team has received a promotion to play in Asia/Oceania Zone Group 2 of the Davis Cup next year after securing a 2-1 win over Hong Kong today.

Before encountering Vietnam, Hong Kong had won one of the two promotion tickets thanks to their four wins.

In the first game, Nguyen Hoang Thien lost 3-6 6-3 1-6 to Ognian Kolev before Pham Minh Tuan leveled it 1-1 after beating King Phillip. Tuan defeated Phillip 6-2 in the first set before the Chinese player withdrew due to injury.

The 2-1 victory leaves Vietnam in second place after Hong Kong and sent them on to group 2 of the Davis Cup’s Asia/Oceania Zone in 2014.

Vietnam is in Group 3 with the UAE, Iran, Cambodia, Hong Kong, Oman, Malaysia, and Pacific Oceania.