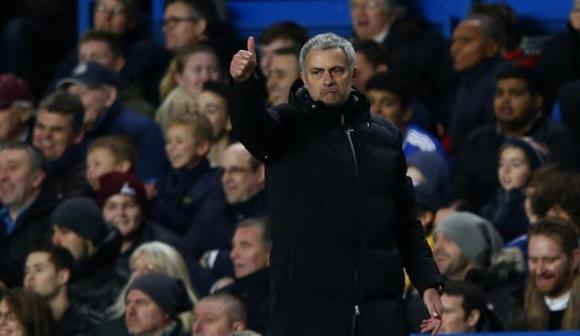 Manchester City's status as Premier League title favourites will pass beneath an unforgiving microscope on Monday when Jose Mourinho's Chelsea travel north for a seismic clash at the Etihad Stadium.

City moved to the top of the table after crushing Tottenham Hotspur 5-1 on Wednesday and having already plundered 115 goals in all competitions this season, they are widely seen as the country's outstanding team.

With a run of five consecutive league victories, Chelsea had been keeping pace, but a frustrating 0-0 draw at home to West Ham United in mid-week saw them fall three points behind their rivals.

Mourinho has lauded City as clear title favourites in recent weeks, but with Monday's match drawing closer, he has started to fire off some characteristically pernicious barbs.

The Chelsea manager dismissed Tottenham manager Tim Sherwood's claim that City were the best team on the planet and went on to allege that Manuel Pellegrini's side were benefiting from favourable officiating.

Spurs, Newcastle United and Liverpool have all had goals disallowed for offside in recent losses to City and Mourinho said: "They are lucky. The reality is they have many crucial decisions in their favour.

"Against Liverpool, the (Raheem) Sterling 'goal'. The penalty on (Luis) Suarez (that was not given). Against Newcastle the (Cheick Tiote) goal that is a clear goal.

"Against Tottenham, (Michael) Dawson's goal, the penalty, the (Danny Rose) red card. They are having everything. I repeat, because I don't want to be misinterpreted -- (it is) just pure coincidence.

"The referees, they try to do their best and sometimes they make mistakes and normally during the season the mistakes are split between teams. In their (City's) case, they have everything in their favour."

While Mourinho has repeatedly drawn a distinction between his supposedly embryonic team and Pellegrini's "finished product", Chelsea beat City 2-1 when they met at Stamford Bridge in October.

City are a vastly different prospect on home turf, however, having won all 11 of their league matches at the Etihad, where they score goals at a rate of close to four per game.

Manchester United, Everton, Tottenham, Arsenal and Liverpool are among the teams to have been ruthlessly dispatched in front of City's fans, for an aggregate winning margin of 21-6.

While Mourinho's tactics tend to be more cautious, Pellegrini refuses to criticise the approach taken by the man who succeeded him as manager of Real Madrid in 2010.

"I don't know which way Chelsea will play on Monday," said the Chilean. "They have a style of play. Maybe it's not the same style that I like, but everyone can play the way they want.

"I never criticise what other teams do. I think it is very important for every team to resolve the problem that they have every match."

Chelsea's chances of victory appear to have been enhanced by the news that City's top scorer, Sergio Aguero, will miss the game after sustaining a hamstring problem during the victory at Spurs.

However, Alvaro Negredo is fit again after a shoulder injury, while fellow striker Edin Dzeko has scored seven goals in his last six appearances.

Pellegrini can also now call upon Montenegro international Stevan Jovetic, who claimed his first Premier League goal at Spurs after an injury-plagued start to his time in England.

Aguero joins midfielders Samir Nasri and Javi Garcia on the sidelines, but James Milner could feature after overcoming a groin problem.

"We all know that it's going to be a difficult game, but we beat them at home, even if that was also a tough match," said Chelsea midfielder Ramires.

"Despite the fact it will be difficult, a victory there would be very sweet and we are going to give our very best."