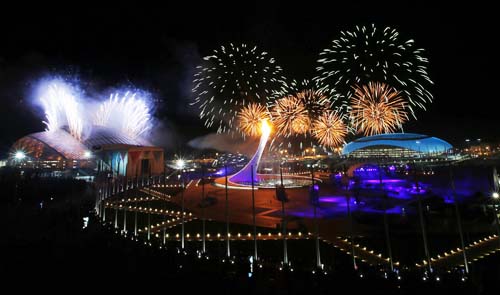 The creative director of the Winter Olympics opening ceremony played down the significance of a technical hitch during the lavish show on Friday, where one of the five rings that make up the Games' symbol failed to open.

The apparent failure meant the ring could not be illuminated by fireworks as had happened during rehearsals.

Five giant snowflake-shaped structures suspended from the roof of the Fisht Stadium on the shores of the Black Sea in Sochi were supposed to open into circles and then light up with pyrotechnics.

Only four opened, and that particular feature, near the very start of the 2-1/2-hour opening ceremony, was abandoned.

"Zen buddhists have a saying that if you have the perfectly polished ball, leave a nick in it so you can understand just how perfectly it is polished," Konstantin Ernst, head of Russia's biggest television station, told reporters.

"The (opening of the) rings was the simplest technical thing. That came first and everything else went off, and this was that nick."

Asked if he thought the glitch may have detracted from the show, Ernst was unwavering.

"No normal person would get distracted by one snowflake that did not open from the story that is being told over two and half hours," he said.

Russian President Vladimir Putin has staked his reputation on staging a safe and successful Games, despite threats from Islamist militants to disrupt them.

Four of five Olympic Rings are seen lit up during the opening ceremony of the 2014 Sochi Winter Olympics (Photo: Reuters)

The Olympic Cauldron is seen in the Olympic Park at the end of the opening ceremony of the 2014 Sochi Winter Olympics, February 7, 2014 (Photo: Reuters)

A man puts on a helmet with a set of action cameras during the opening ceremony of the 2014 Sochi Winter Olympics in front of the Olympic flame cauldron  (Photo: Reuters)

People watch the opening ceremony of the Sochi 2014 Winter Olympics on a television screen in Rosa Khutor  (Photo: Reuters)