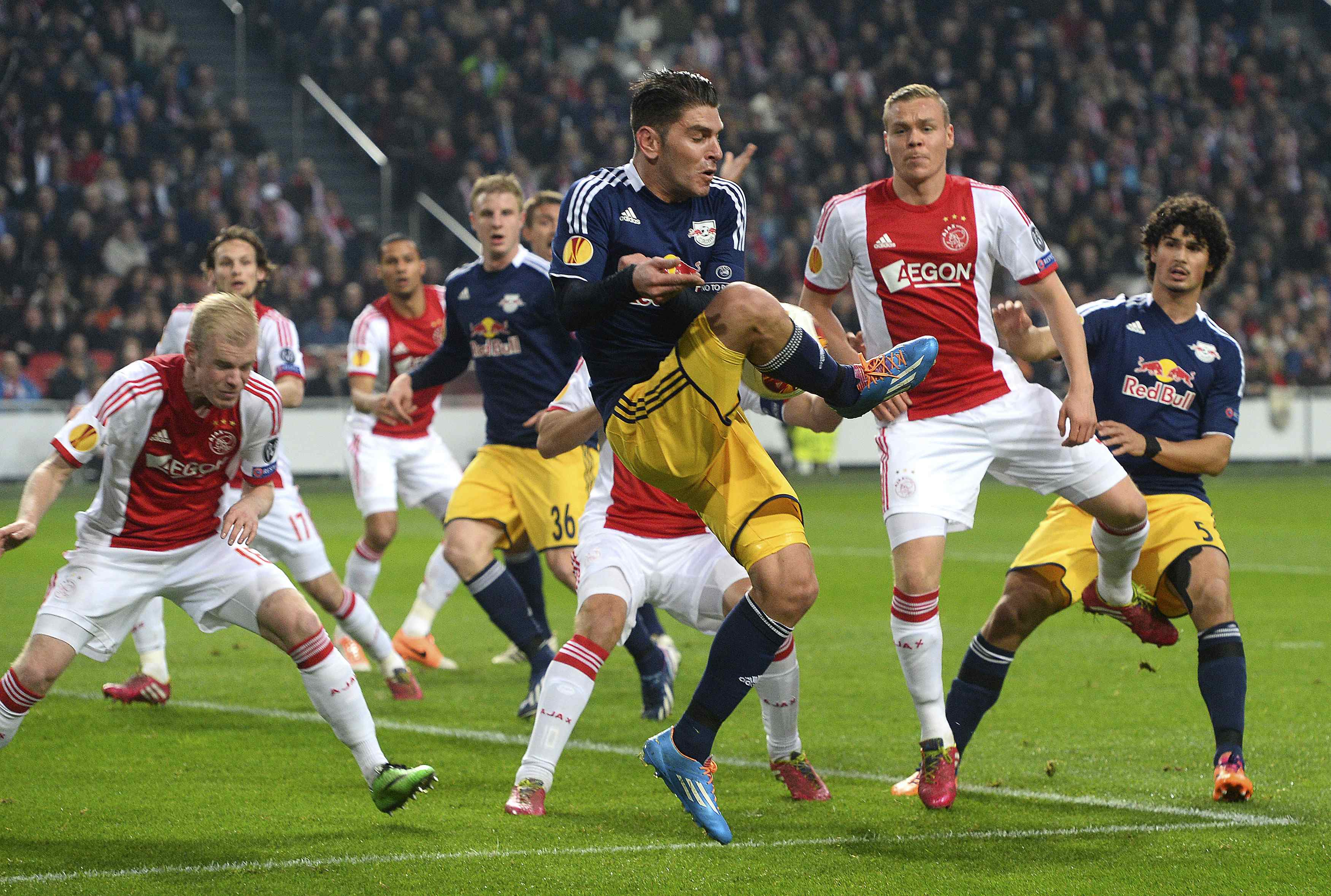 BERNE – Jonathan Soriano scored an incredible goal from near the halfway line to complete a stunning 3-0 win for Salzburg away to once-mighty Ajax Amsterdam in the Europa League round of 32 on Thursday.

Dani Osvaldo scored his first goal for Juventus to set the Italian champions on the way to a 2-0 win over Trabzonspor, however compatriots Lazio slumped to a shock 1-0 defeat at home to Ludogorets Razgrad in other first leg ties.

Soriano gave Salzburg a 14th-minute lead with a penalty and Sadio Mane doubled the advantage with a clinical finish from Kevin Kampl's pass seven minutes later.

The highlight came in the 35th minute when Spaniard Soriano picked up a loose ball inside the centre circle, saw Jasper Cillessen off his line and scored with a looping effort which had the Ajax goalkeeper desperately chasing back in vain.

Osvaldo, signed on loan after a troubled and disappointing six months at Premier League Southampton, fired home with an angled shot in the 16th minute after the ball ricocheted to him.

Juventus, one of eight teams who parachuted into theEuropa League knockout stage after finishing third in their Champions League groups, lived dangerously before Paul Pogba added the second from a Carlos Tevez pass in stoppage time.

Lazio's difficult season continued as they missed a penalty on their way to a defeat against the Bulgarian champions in a game which also featured two red cards.

Roman Bezjak sank Lazio with a swerving 25-metre shot on the stroke of halftime and Lazio's Felipe Anderson had a penalty saved after the re-start before Svetoslav Dyakov (Ludogorets) and Luis Cavanda (Lazio) were both sent off.

Fiorentina had no such problems as Alessandro Matri, Josip Ilicic and Alberto Aquilani, from a penalty, shared the goals in a 3-1 win at Esbjerg while Napoli drew 0-0 away to Swansea City.

Ramos was in charge of Tottenham when they won the League Cup in 2008, the last occasion they lifted a trophy.

"Both teams did their best in order to win the game and luckily we were able to score the goal which gives some priority (in the tie)," Ramos told a news conference.

"We are aware that in London, 90 difficult minutes await us and we will try to do our best."

Valencia scored two late goals to beat Dynamo Kiev 2-0 in a match played in neutral Cyprus after being moved from Ukraine because of the clashes which have killed more than 70 people in Kiev since Tuesday.

New signing Eduardo Vargas headed in from a corner in the 79th minute and Sofiane Feghouli scored a fortuitous second with a wayward shot that hit Domagoj Vida and looped over the committed Kiev keeper Olexandr Rybka.

Porto squandered a two-goal lead in a 2-2 draw with Eintracht Frankfurt while Maribor and Sevilla also shared four goals.

Chernomorets Odessa were held 0-0 at home by Olympique Lyonnais, Anzhi Makhachkala's match at home to Genk also ended goalless as did the tie between Maccabi Tel Aviv and last season's semi-finalists Basel.