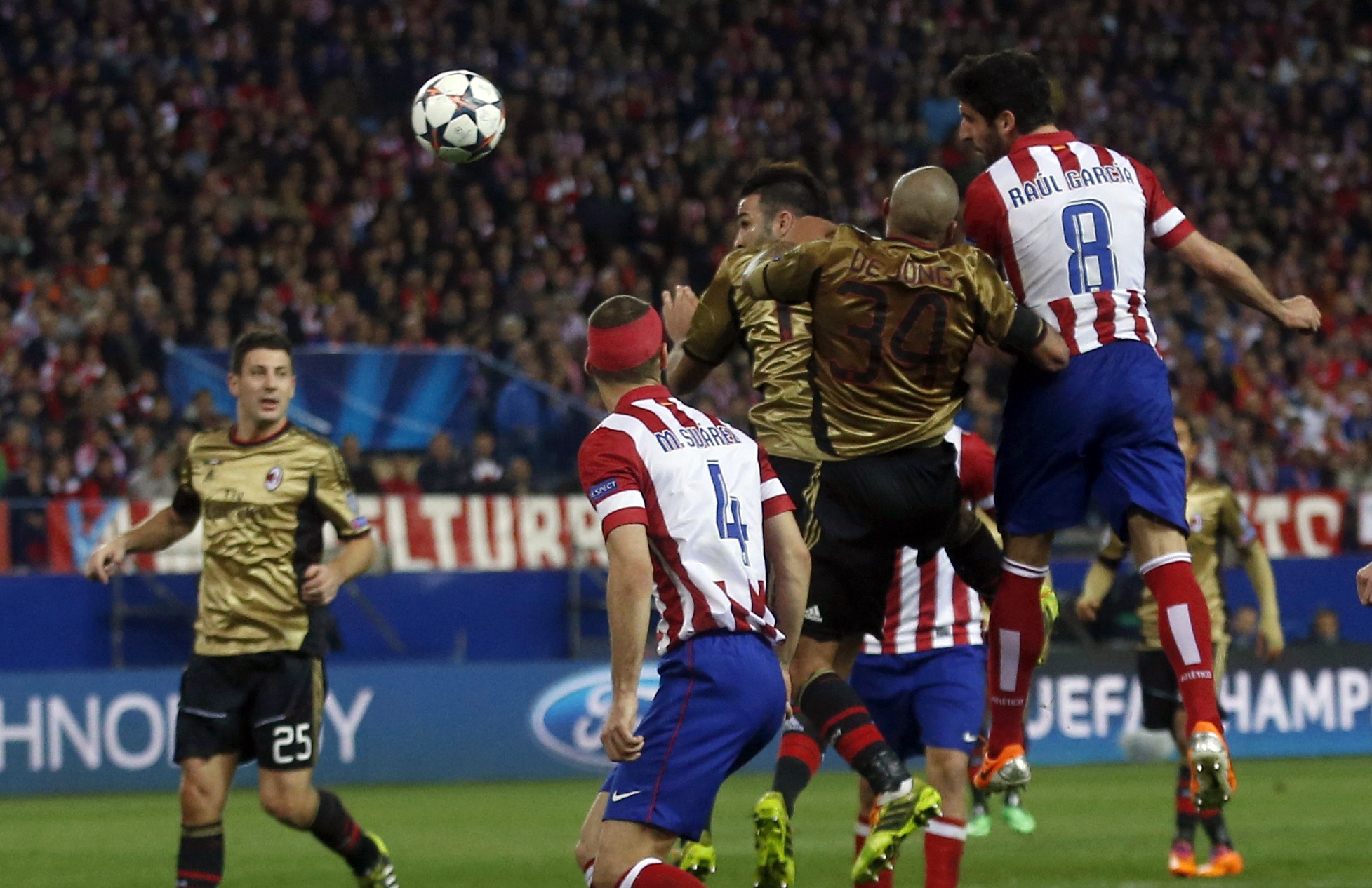 Diego Costa extended his rich vein of form with a double as Atletico Madrid thumped AC Milan 4-1 to send the seven-times winners packing and secure a place in the Champions League quarter-finals for the first time in 17 years.

Costa, who struck in Atletico's 1-0 win at the San Siro in the first leg of the last-16 tie and has seven goals in five appearances in Europe's elite club competition, opened the scoring in the third minute with an acrobatic volley.

Kaka levelled with a header in the 27th as Milan briefly took control of the match before Arda Turan's deflected effort sailed into the net five minutes before halftime to restore the home team's lead.

Raul Garcia headed Atletico's third in the 71st minute and Costa struck again five minutes from time to seal a 5-1 aggregate success and crown a near-perfect night for the fans throngingCalderon stadium next to Madrid's Manzanares river.

"We played very well as a team tonight," Brazil-born Costa, who made his first appearance for adopted country Spain this month, said in an interview with Spanish television.

"We are grateful for the support of the fans and the truth is that the team deserves congratulating for the way it has played," he added.

"We don't really want a particular opponent in the next round. All the teams that will be in the quarter-finals will be tough prospects. For now we'll just enjoy."

Atletico, whose last appearance in the last eight in 1997 was with a team featuring current coachDiego Simeone, thoroughly deserved their victory, and they have matched their best result in the competition.

"I knew that Milan could complicate things," Simeone told a news conference.

"We started better than them in the first half and it seemed we would go on and control the game after the first goal, but they got back into it," added the Argentine, who has transformed Atletico since taking over in late 2011.

"However, my players were excellent in the second half."

Milan's exit means there will be no Italian side in the quarter-finals for the first time since 2009.

The Serie A club are mired in mid table in their domestic league and face a real battle to secure a place in European competition next season.

It was only the fourth time Milan have conceded four goals in the Champions League. New coachClarence Seedorf, who took over when Massimiliano Allegri was sacked in January, has much to ponder.

"Congratulations to Atletico they deserved this victory, especially for the way they played in the second half," Seedorf said.

"We did not manage to maintain control of the game and their second goal came at our best moment," added the former Ajax Amsterdam, Real Madrid and Milan midfielder, the only player to win the Champions League with three different clubs.

Atletico started the game with real intent, and Costa brought the home faithful to their feet with his spectacular early goal from Koke's far-post cross.

Raul Garcia scuffed a shot narrowly wide of the Milan goal in the ninth minute but the visitors gradually started to gain some control and Mario Balotelli threatened before Kaka's leveller, a header that ricocheted into the net off Atletico fullback Juanfran.

It was the 31-year-old former Real Madrid man's 30th goal in Europe's elite club competition, more than any other Brazilian, and he should have had another when well placed in the 36th minute but headed over the crossbar.

Atletico weathered more Milan pressure until a well-worked move created space for Arda just outside the penalty area and his volley deflected off centre back Adil Rami, leaving Abbiati to watch it loop past him into the net.

Garcia almost netted an overhead kick and a Gabi effort spun away off the outside of the post either side of halftime as Atletico looked increasingly comfortable as the second half wore on.

"I think over the two games against Milan we were really good," Atletico keeper Thibaut Courtois said on the UEFA website (www.uefa.com).

"Maybe it was a bit difficult at the end of the first half tonight, but overall in the tie we were the better side," added the Belgian international, who is on loan from English Premier League side Chelsea.

Milan's best moment of the second half came with the tie already beyond them when substitute Robinho struck a shot against the crossbar in the 73rd minute.

The draw for the quarter-finals takes place on March 21, when Atletico could be drawn against La Liga rivals Real Madrid or Barcelona if they make the last eight as expected.