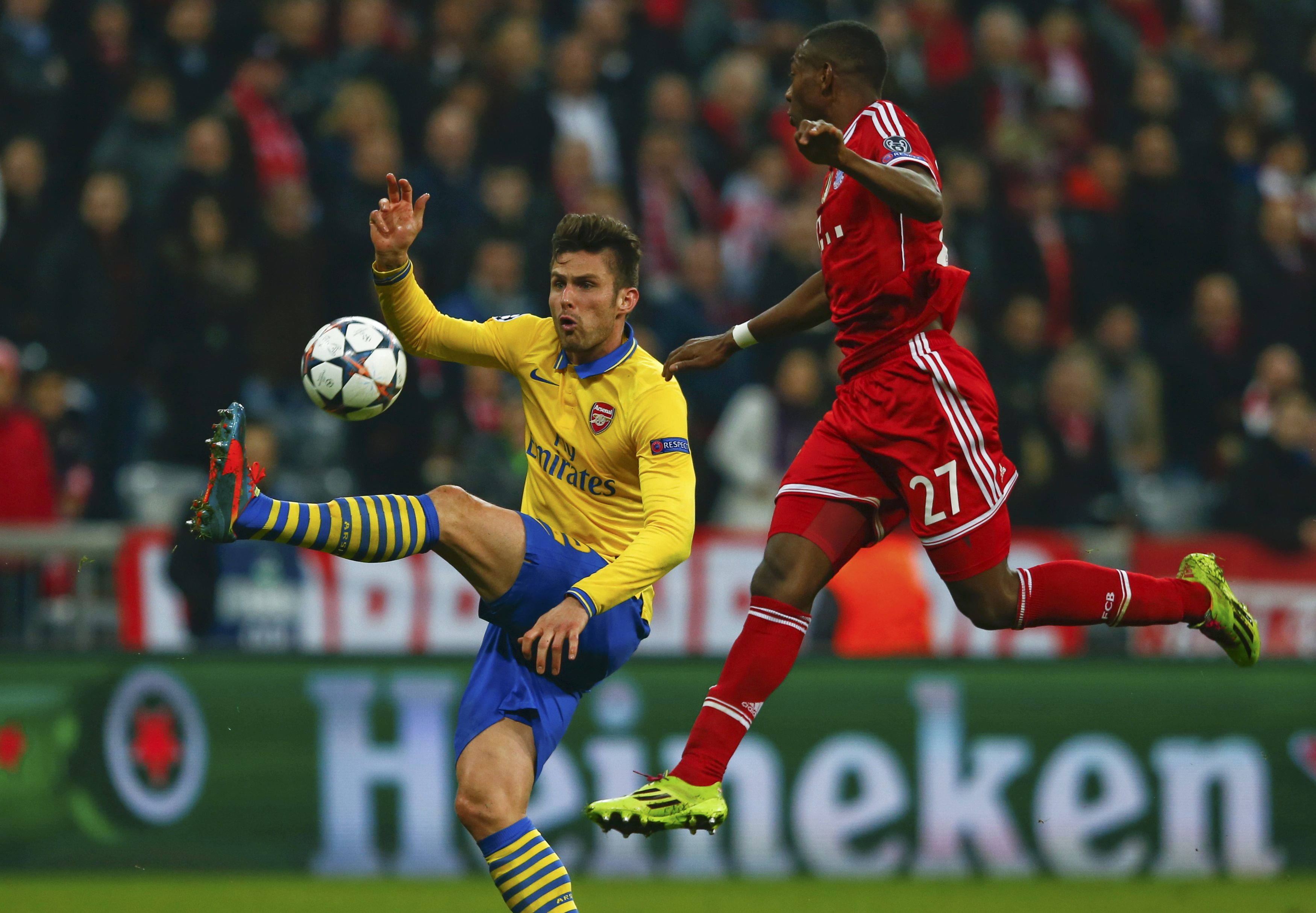 Bayern Munich, a shadow of the team that have been so imperious in the Bundesliga this season, survived a shaky second half and missed a late penalty against Arsenal on Tuesday to reach the Champions League quarter-finals.

The holders looked less than all-conquering in a 1-1 second-leg draw against Arsenal who were left with too much to do after losing 2-0 at home in the opening match of the last-16 encounter.

Runaway leaders Bayern have dropped only four points all season in the Bundesliga, and blasted 15 goals in their previous three games, but were well below their best against the Londoners at the Allianz Arena.

Bastian Schweinsteiger broke the deadlock in the 55th minute before Bayern old boy Lukas Podolski replied almost immediately for Arsenal who grew in confidence and brought out goalkeeper Manuel Neuer's eccentric side.

The Bavarians won a controversial penalty when Arjen Robben reacted theatrically to a foul by Laurent Koscielny in stoppage time and Thomas Mueller's spot kick was superbly stopped by keeper Lukasz Fabianski, ending a run of 13 straight wins in all competitions.

"We had to defend a lot in the first half but we knew that by being in the game at halftime we stood a good chance to win and I believe in the second half the opportunities were there," said manager Arsene Wenger after Arsenal's fourth successive last-16 exit.

"We never got them really under pressure, they suddenly became nervous but because we never managed to make it 2-1 you could not see how they would have responded," the Frenchman told reporters.

Arsenal lost to the Germans on away goals at the same stage last season despite winning 2-0 in Munich.

Coach Pep Guardiola said on Tuesday that the lead Bayern held from the first leg prevented his team from going all out on the attack.

"We had a lot of control but the opponents didn't push and in the head of the players we were already 2-0 ahead," the Spaniard explained.

"You're not always going to score lots of goals. This was a top-level team we were facing."

Bayern spent most of the first half probing a resilient Arsenal defence that just about managed to hold out.

It was touch and go for Wenger's men especially when Franck Ribery was free down the left and sent the ball into the middle where Robben failed to connect properly.

Javi Martinez's goal was disallowed for offside in the 26th minute and Robben had two dangerous efforts cut out by Arsenal defenders as Bayern tried to turn the screw.

Fabianski came to the rescue when he got down to save Mario Goetze's low shot seconds before the break.

Bayern finally broke through 10 minutes after the restart when Ribery sneaked into the area and laid the ball off for Schweinsteiger to finish from eight metres.

The home fans were stunned two minutes later when the referee allowed play to continue even though Podolski seemed to push Philipp Lahm in the box and the Arsenal forward slammed the ball into the roof of the net.

Neuer then had to come out of his box to head the ball clear after Tomas Rosicky tried to send Olivier Giroud clean through.

The Germany keeper had the Bayern fans on edge again when he sent a clearance straight to Giroud but the Bundesliga leaders quickly regrouped.