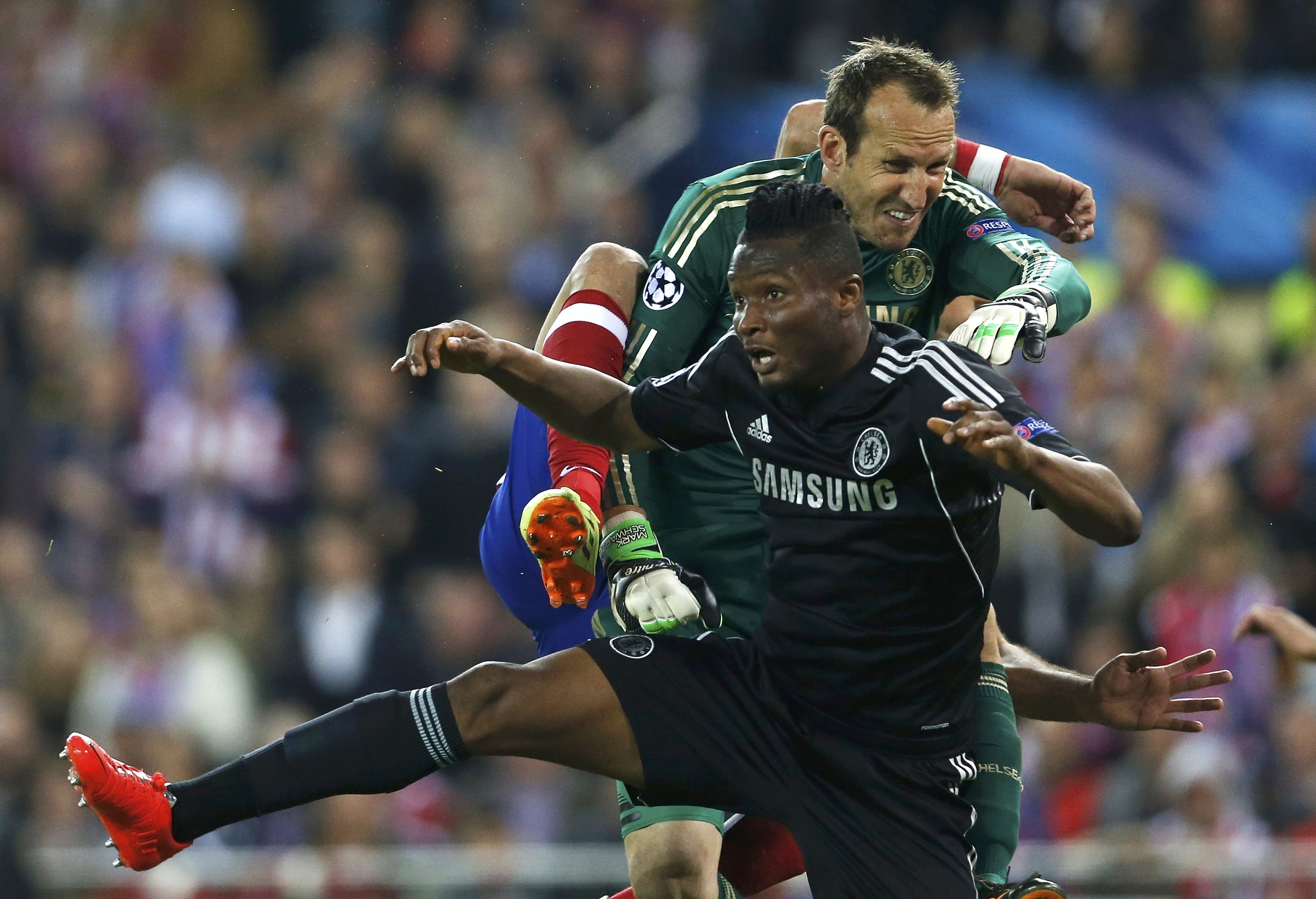 Chelsea manager Jose Mourinho returned to Spain with an ultra-cautious approach as his team earned a 0-0 draw with surprise Champions Leaguesemi-finalists Atletico Madrid in a first leg lacking in excitement on Tuesday.

The stalemate at the Vicente Calderon, which Atletico coach Diego Simeone believes gives Chelsea a slight advantage in next week's return at Stamford Bridge, came at a cost for the 2012 winners, however.

Goalkeeper Petr Cech was ruled out for the season after hurting his elbow, captain John Terry limped off with an ankle injury and midfielders Frank Lampard and John Obi Mike learned bookings that mean they are suspended for the second leg.

Atletico, through to the last four of Europe's elite club competition for the first time in 40 years, dominated their defence-minded visitors and pushed hard for a goal but failed to carve out the advantage they wanted.

Back in the Spanish capital for the first time since quitting Atletico's city rivals Real at the end of last season, Mourinho set out to thwart the home team rather than attack them and the result means his side will be favourites to advance to next month's final in Lisbon.

The Londoners lost Cech when he fell heavily and hurt his right elbow in the 15th minute but neither his replacement Mark Schwarzer nor Atletico keeper Thibaut Courtois, on loan from Chelsea, were genuinely tested in a drab affair.

"We had problems before the game, during the game and lost four players, two with injuries and two with yellow cards, but we will fight," Mourinho told a news conference.

"Nobody starts a game thinking of a 0-0," added the Portuguese, who ended his final season at Real without any major silverware after they lost to Atletico in the King's Cup final.

"But the game goes in a certain direction where you feel you have to be safe and not concede, try to score in one of the chances you create.

"We had three or four corners and two free-kicks in dangerous positions. If we scored one of them the result would have been very good. We didn't, and we go with a result where everything will be decided at Stamford Bridge."

There was another cracking atmosphere before kickoff at the 55,000-capacity stadium next to the Manzanares river where the fans have been flocking to enjoy what is easily Atletico's best season in almost 20 years.

They are top of La Liga ahead of Real and champions Barcelona, whom they dispatched in the Champions League quarter-finals, and closing in on their first domestic league title since 1996 when Simeone was in the team.

The former Argentina captain deployed an attacking formation against Chelsea with Diego Costa leading the line supported by Raul Garcia as Diego and Koke provided the creative impetus just behind.

Mourinho, by contrast, had containment in mind, with former Atletico captain Fernando Torres alone up front and defender David Luiz in a holding role in a five-man midfield.

Mourinho had instructed his players to sit back and try to catch Atletico on the break and they were happy to let the home side have the ball in a first half short on entertainment.

Chelsea were forced to make an early change when Cech was knocked to the ground by a tumbling Raul Garcia at a corner and he was helped off clutching his right arm, an injury that has ended his campaign.

Australian Schwarzer, 41, making only his second Champions League appearance, became the oldest player to feature in the knockout phase.

With almost the entire Chelsea team behind the ball, the hosts managed only one shot on target before the break, a weak Diego effort, and the visitors none.

Midfielder Mario Suarez flashed a long-range drive narrowly wide in the 34th minute and Costa had a volley well blocked by Cesar Azpilicueta but otherwise there was little goalmouth action.

The second half was a similarly cagey affair and there was more bad news for Chelsea in the 73rd minute when Terry limped off after turning his ankle at a corner.

Atletico captain Gabi forced a decent save from Schwarzer in the 76th minute and Costa had a chance with a header late on as Atletico pressed for a goal.

Chelsea, though, held out reasonably comfortably and their players looked much the happier at the final whistle.

Gabi, who was booked and will also be suspended for the return at Stamford Bridge, said he and his team mates were unhappy with the result.

"Atletico wanted to win the match at any cost but they (Chelsea) defended very well," midfielder Gabi told TVE. "We knew they wouldn't want to concede a goal and I think Atletico played a much more attacking game.

"It leaves a bad taste in the mouth but the tie is still very open and we will go to Chelsea and try to win."

Chelsea's Spain fullback Azpilicueta said it was "a positive result. We knew it would be a difficult atmosphere.

"We fought hard and tried to keep the ball but the important thing is that we have the second leg at home. The players we will be missing are very important but we will fight to win."