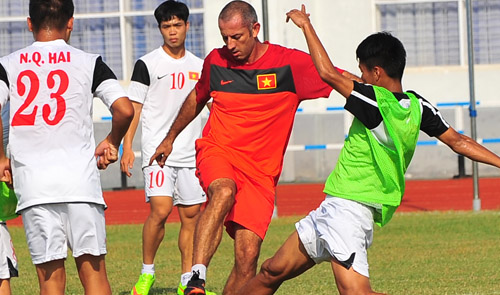 Vietnam upbeat before playing champions S.Korea in Asian U-19 opener

Vietnam’s men’s football squad are relaxed ahead of their showdown with defending champions South Korea in their Group C opener on Thursday at the AFC U-19 Championship 2014, running from October 9 to 23 in Myanmar.

The game will be broadcast live on Vietnamese TV channel VTV6 at 4:00 pm.

“My men are facing almost no psychological pressure and will play hard to achieve a good result,” said French coach Guillaume Graechen of the Vietnamese side.

The young Vietnamese players are confident and in high spirit, especially after obtaining impressive results at the 2014 Southeast Asian U-19 tournament.

Vietnam finished the event, also known as the AFF Nutifood U-19 Cup 2014, in second place after losing 0-1 to Japan in the finale at Hanoi’s My Dinh Stadium on September 13.

Graechen told a Tuoi Tre (Youth) newspaper reporter that he hopes for a 1-0 or 2-1 win for Vietnam.

Vietnamese center back Dong Trieu will miss the match today due to an injury and will be replaced by Xuan Hung, who is 1.8m tall and skilled at launching precise long passes for counterattacks.

The two other teams in Group C include Japan and China. The final round of the AFC U-19 tournament has 16 teams.

"Our target is to get the ticket to go to the World Cup as semi-finalists, but also to play good football and give pleasure to the fans in the stands and watching at home," Graechen told the AFC, or Asian Football Confederation, website.

"Although I've only been in charge of these players for around a year now, many of them have come from the academy that I set up seven years ago.

"Tomorrow we will try to do our best in our opening game and it's a great experience for my players as many don't play in competitions or leagues."

South Korea have a rich history at the Asian championship as 12-time champions, four-time runners-up, and four-time third-place winners.

Japan are six-time runners-up, while China reached the finale of the Asian championship in 2004.