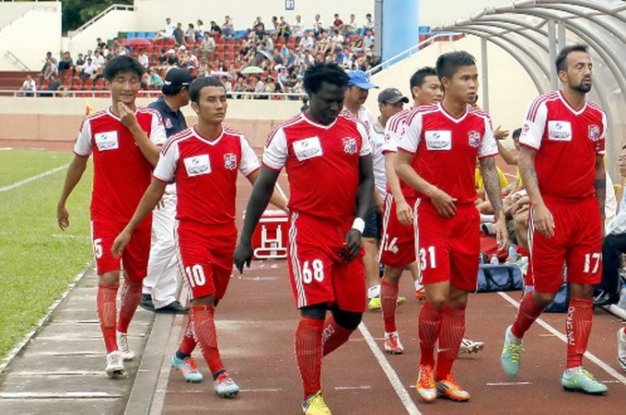 The Asian Football Confederation (AFC) has just decided to prohibit six Vietnamese players from playing continental matches, following a suspension from domestic football (soccer) the local federation imposed on them in July for allegedly fixing a league game in return for over US$15,000.

The chairman of the AFC Disciplinary Committee has extended the ban on the six players – from Dong Nai FC – from domestic competition to the Asian level, the confederation said Thursday on its website.

This move was initiated “following a request from the [Vietnam Football Federation (VFF)] pursuant to Article 136 of the AFC Disciplinary Code,” it noted.

The suspended players include:

“Each extension decision shall expire on 23 January 2015 or the issuing of a final decision by the VFF Disciplinary Committee, whichever is sooner,” AFC said.

The decisions have been duly notified to the VFF, it added.

On July 23, the disciplinary committee of the VFF temporarily suspended the six players from partaking in any domestic football-related activity in the wake of police investigations into their purported match rigging.

The footballers, including their captain, were nicked on July 20 after Dong Nai FC lost 3-5 to hosts Quang Ninh at Cam Pha Stadium in the northern province of Quang Ninh in the 21th round of the top-flight V-League.

The group was accused of rigging the match so that Quang Ninh would defeat Dong Nai by a two-goal gap, according to police.

In reality the six managed to keep the game going as arranged with a local bookmaker, investigators said.

Pham Huu Phat, the team captain, received VND325 million ($15,300) from the bookmaker after reaching a consensus in order to share with the others, police said, adding that they were apprehended after the game finished.

The players were found fixing other matches as well and pocketing up to VND800 million ($37,700) each, Major General Ho Si Tien, a police chief from the Ministry of Public Security, said.

Five of them have been released after three months of detention, with the captain still in police custody for further investigation.