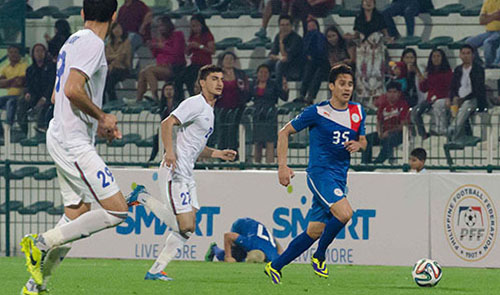 Vietnam will stage a friendly match with Malaysia in Hanoi this weekend to prepare for the 2014 Southeast Asian Football Championship, or AFF Suzuki Cup, which will begin later this month.

The match on November 16 at My Dinh Stadium will be the last friendly game for Vietnam ahead of their AFF Suzuki Cup campaign.

In the two previous friendlies, Vietnam beat Hong Kong 3-1 in September at Lach Tray Stadium in the northern city of Hai Phong and were defeated 1-3 by Palestine this month in the capital city.

Vietnam and Singapore will co-host the 2014 AFF Suzuki Cup from November 22 to December 20.

The Vietnamese will compete in Group A with Indonesia, the Philippines, and Laos, while Group B includes Singapore, Malaysia, Thailand, and Myanmar.

Vietnam’s Group A rivals have made careful preparations for the tournament.

The Philippines, who advanced to the semifinals in the two editions in 2010 and 2012, have called up many players who compete in professional leagues in the U.S. and Thailand under the leadership of coach Thomas Dooley, former captain of the U.S. national team.

They have outstanding footballers such as Kenshiro Daniels, Simone Rota, Daisuke Sato, and especially Martin Steuble, 26, who plays for Sporting Kansas City of the U.S. Major League Soccer.

In addition, the Philippines also have striker Javier Patino, 26, who plays for Buriram United FC of the Thai Premier League.

The Indonesian team had a training trip in Spain in March. Austrian coach Alfred Riedl, who used to lead the Vietnamese squad, visited Vietnam twice this year to ‘spy’ on their players in the two previous friendly games.

The Laotians, considered the underdogs of the group, achieved impressive results in the qualifiers of the 2014 AFF Suzuki Cup, held from October 12 to 20 in Laos, when they scored 10 goals altogether in four matches with Brunei, Cambodia, Myanmar, and Timor-Leste.

Laos and Myanmar won two tickets to join the six others in Southeast Asia to play the finals of the tourney.

The semifinal and final games will be played on a home and away basis from December 6 to 20.