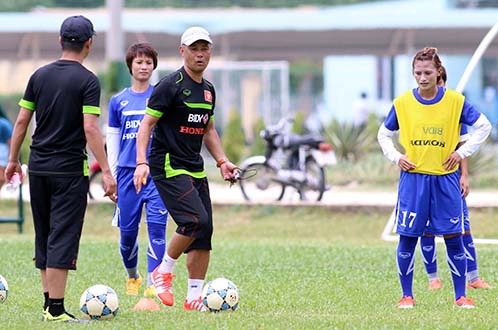 Vietnam is confident ahead of its opening match with Myanmar today in group B of the 2015 Southeast Asian Women’s Football Championship, or AFF Cup, taking place from May 1-10 in Ho Chi Minh City.

Japanese coach Norimatsu Takashi of Vietnam said, “We are now at ease and confident that we will beat Myanmar.”

The match of the host with Myanmar will be held at 6:30 pm today at Thong Nhat Stadium and live broadcast on VTV6 and HTV The Thao (Sports).

Players of the Japanese led team smoothly operated the 4-4-2 formation during the games with fast attacking setups.

The rival team Myanmar had a training trip in Thailand and drew 2-2 with the Thai national women’s football team.

Myanmar’s coach Htet Htet Win also announced that she targets the championship title of the tournament.

“We will top group B. So we want to defeat the host Vietnam in the opening game though it is not an easy job because Vietnam is led by a Japanese coach and will perform a new style of play.”

Vietnam terminated contract with Chinese coach Chow Yun Fat last year after seven years of cooperation after the Vietnamese national women’s football team lost 1-2 to Thailand in the play-off to compete for a ticket to advance to the 2015 World Cup finals in Canada.

Then, Myanmar also stopped contract with their Japanese coach Kumada Yoshinori last year after suffering the similar failure with Vietnam in the World Cup run.

The other match of group B today will be the performance of Malaysia and the Philippines.

Yesterday in group A, Thailand lost 0-3 to Australia and Laos beat Indonesia 2-0.