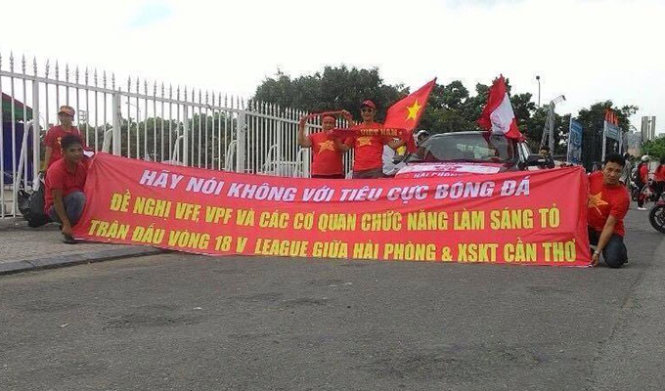 Fans of several football clubs in Vietnam have hung banners appealing for police to investigate losses in recent football matches in the top-tier V-League 1 that were alleged of match fixing.

The V-League 1 has recently become entangled in increasing doubts, a fact that is contrary to the promises of high ranking officials of the Vietnam Football Federation to ‘make efforts to regain confidence from fans’.

The reality is that fans suspect players of fixing the results of recent matches.

Clubs which are battling against relegation suspect that other clubs ‘donate’ points to their rivals.

And many suspect that sponsors will lower the value of the league next season.

Fans asked police to investigate the 1-3 loss of Song Lam Nghe An to Hoang Anh Gia Lai in the 22nd round of the V-League 1 on August 22.

Fans also asked police to look into the 2-1 loss of Dong Tam Long An to Can Tho.

It is suspected that teams in danger of relegation, such as Can Tho and Hoang Anh Gia Lai, have used their “off-field” relations to get wins thanks to the “voluntary losses” of Song Lam Nghe An and Dong Tam Long An.

With the 14-team league set to wrap up after four more rounds, the alleged “suspect wins” and “voluntary losses” are predicted to continue.

There is no doubt that the value of the V-League 1 has been decreasing with the loss of confidence from fans.

As a result, many suspect that sponsors will turn away from football leagues in Vietnam in the coming time.

It should be noted that Toyota spent just VND30 billion (US$1.4 million) a year to become the main sponsor of V-League 1.

In comparison, it cost Toyota nearly six times more than that, VND170 billion ($7.7 million), to be the sponsor of the top football league in Thailand, the Thai-League.