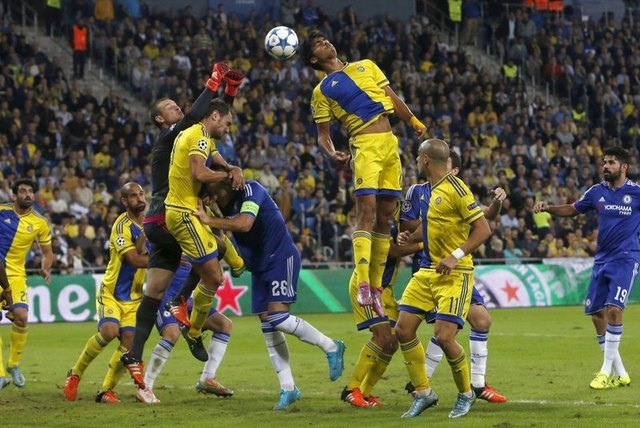 Chelsea repeat drubbing of Maccabi to close in on last 16

HAIFA, Israel, Nov 24 - Chelsea enjoyed their second 4-0 Champions League victory over 10-man Maccabi Tel Aviv this season to move into prime position to reach the knockout stages of the competition from Group G on Tuesday.

With Dynamo Kiev winning 2-0 at Porto, however, the qualifiers for the last 16 will only be determined in the last round of matches when Chelsea host Porto and Kiev welcome Maccabi.

Goals by Gary Cahill, Willian, Oscar and Kurt Zouma secured the victory for Chelsea whose task was made easier when Maccabi captain Tal Ben Haim, a key player in the heart of the defence, was sent off five minutes before halftime.

After five games, Chelsea, who only need to draw their final match to progress, and Porto each have 10 points with Kiev on eight, while Maccabi are bottom without a point.

Cahill had put the visitors on the scoresheet in the 20th minute with a close-range effort after mounting Chelsea pressure as Maccabi's spirited start faded after about 15 minutes.

Maccabi kept up their attempts to penetrate the Chelsea defence but their cause was undermined when Ben Haim was shown a red card for a wild kick on striker Diego Costa.

The Israelis maintained their efforts after the break but the result was sealed when Willian scored in the 73rd minute with a perfectly-executed curling free kick that beat the Maccabi wall and left goalkeeper Predrag Rajkovic stranded.

Oscar made it 3-0 in the 77th from close range as Maccabi's defensive shield was breached again before Zouma pounced on a corner in the first minute of added time to seal the win.

Chelsea coach Jose Mourinho said the result flattered his side.

"I think we played very well in the first half, the pitch didn't help," Mourinho said.

"In the second we slept a bit for the first 15-20 minutes waiting for the second goal to come and only when we were again in danger did we react well. No doubt about the victory but I think Maccabi deserved a bit more than that."

Maccabi coach Slavisa Jokanovic said the sending off made it impossible for his players to overcome technically superior opposition.

"Playing 11 against 11 is hard enough in the Champions League and when it's 10 against 11 Chelsea players it becomes pretty much impossible," he said.

Moments before the second goal, Chelsea captain John Terry had to be substituted after injuring his ankle, an incident which Mourinho said occurred as a result of the poor playing surface.

The extent of the injury was not initially known but Mourinho looked worried and suggested Terry may not be available to play against Tottenham Hotspur in the Premier League on Sunday.

"This is such a beautiful stadium and a wonderful crowd but the surface was really bad. They deserve better than this," he said.