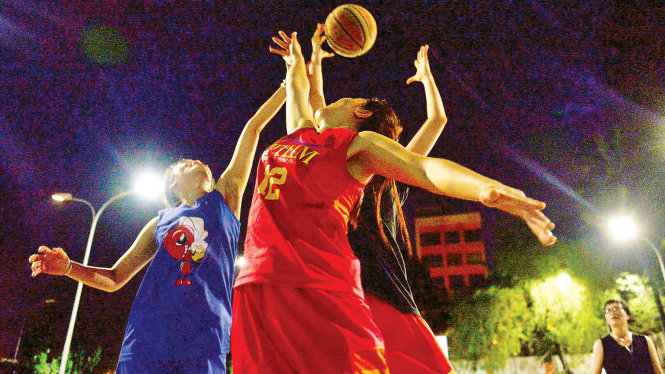 People may play sports and do exercise during the day or in the early evening, but not many opt for workouts around midnight or in the small hours, except for the following busy youngsters and adults in Ho Chi Minh City.

Dao Thao Ai, a student from the Industrial University of Ho Chi Minh City, was one day seen playing basketball with her friends at a sports ground in Binh Thanh District when it was about 10:00 pm.

In Tan Binh District, it was already 2:00 am but the Chao Lua mini-stadium was still open the other day.

Some young people immersed themselves in the soccer game there, running after the ball on the small pitch.

The sweat was pouring off them but no one seemed tired and nobody bothered to leave.

A young player said it is cheaper to rent the pitch at night, adding it is then the only time when all team members can play together.

According to Dr. Nguyen Hoai Nam, head of the thoracic and vascular examination department of the University Medical Center HCMC, the human body rests and regenerates energy from 1:00 am to 5:00 am.

Therefore, any physical activity during this time might negatively affect a person’s health.

There have been a large number of people suffering a stroke or dying suddenly from 4:00 am to 5:00 am, as they went against their biological clock.

“I think they shouldn’t play sports too late at night to protect their heath,” he concluded.

A youngster practices cycling with no brakes at midnight. Photo: Tuoi Tre

Many people immerse themselves in a soccer match at the Chao Lua mini-stadium in Tan Binh District around midnight. Photo: Tuoi Tre

A man is seen working out at a gym in District 8. Photo: Tuoi Tre