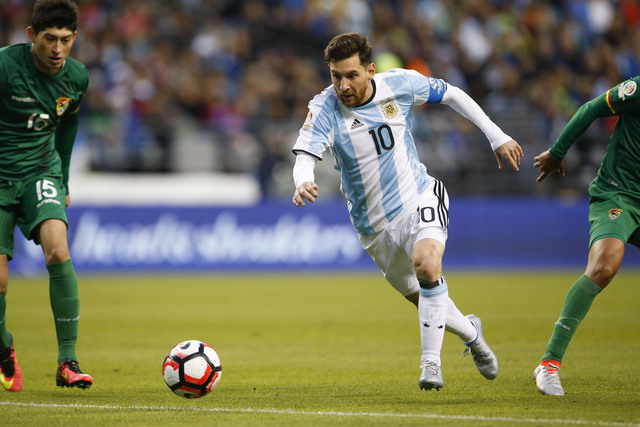 June 18 - Lionel Messi became his country's equal all-time leading goalscorer as Argentina romped to a 4-1 win over Venezuela in a Copa America quarter-final in Foxborough, Massachusetts on Saturday.

A Messi goal in the 60th minute took his career tally for Argentina to 54 goals, matching the record held by Gabriel Batistuta.

Argentina, who are seeking their first Copa triumph since 1993, were the better side throughout but Venezuela made their life easier with some slack defending and a horrific penalty miss by Luis Manuel Seijas.

The result means the 14-time champion will face host nation the United States in next Tuesday's semi-final in Houston.

"It was an important game and it feels good," Higuain said afterwards. "Until Tuesday is not a lot of time but we will turn our head to that. Let's see if we can win."

Argentina have lost just once to Venezuela in 20 matches and they got off to the perfect start after just seven minutes when Higuain dived to turn a delicate cross from Messi past goalkeeper Dani Hernandez.

The in-form Napoli striker made it two 20 minutes later when he latched on to a slack back pass from Arquimedes Figuera to round the goalkeeper and slot the ball into the empty net.

The goals roused the underdogs into action and Salomon Rondon twice came close, once bringing an excellent save out of Sergio Romero and then seeing his header crash off the post.

Venezuela should have pulled a goal back two minutes from half time after Romero brought down Josef Martinez in the box. However, the Manchester United goalkeeper redeemed himself when he stood firm and Seijas' carelessly dinked penalty sailed right into his arms.

Messi, who started for the first time in the tournament after three substitute appearances, put Argentina 3-0 ahead when he worked a lovely one-two with Nicolas Gaitan and then poked the ball under Hernandez with his left foot.

Venezuela were not out of it, though, and Rondon got the lightest of touches on a cross to head home and make it 3-1 after 70 minutes.

However, their hope was short lived as Argentina cancelled it out just seconds later when Lamela, who had been on the field only four minutes, shot home from 12 yards to make it 4-1.

The result firmly establishes Argentina as the favourites to lift their 15th Copa America and equal the number held by Uruguay.

The other semi-final will be between Colombia, who beat Peru on Friday night, and either the winner of Saturday night's Mexico-Chile tie.