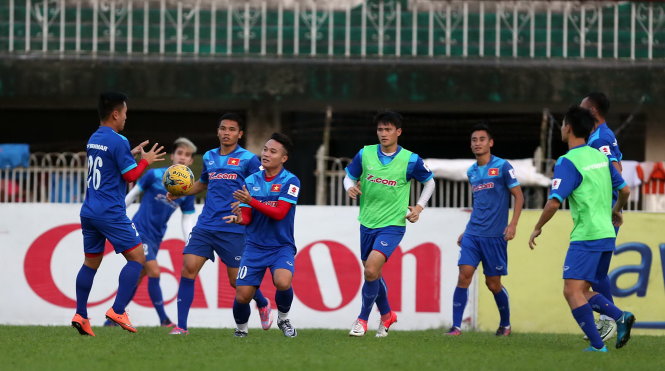 Vietnam are ready to fight for the trophy at the AFF Suzuki Cup 2016 that kicks off this weekend, team members said as they arrived in Myanmar on Tuesday.

Shortly after their arrival in Yangon, coach Nguyen Huu Thang had his players go through a light training session to familiarize themselves with Aung Sang Stadium, where they will play the opener against the hosts on Sunday.

The tournament will run from November 19 to December 17, with the group stages hosted by Myanmar and the Philippines and the semifinals held in the nations that advance.

Vietnam are in Group B with Myanmar, Malaysia and Cambodia, while Group A consists of the Philippines, Thailand, Singapore and Indonesia.

Following the opener with Myanmar, Vietnam will play Malaysia on November 23 and Cambodia on November 26. “We are all ready and it is time to play our best to grab the highest trophy at the AFF Suzuki Cup 2016,” midfielder Vu Minh Tuan said on behalf of the team.

After Tuesday’s training session, goalkeeper Tuan Linh said the whole team are feeling great in Myanmar, thanks to the comfortable weather, accommodation and food.

“We are all looking forward to the opener with Myanmar,” he said.

Thailand are the holding champions of the biennial championship.

The AFF Cup has so far been won by only four countries, with Thailand and Singapore both being four-time winners, while Vietnam and Indonesia have each won once.