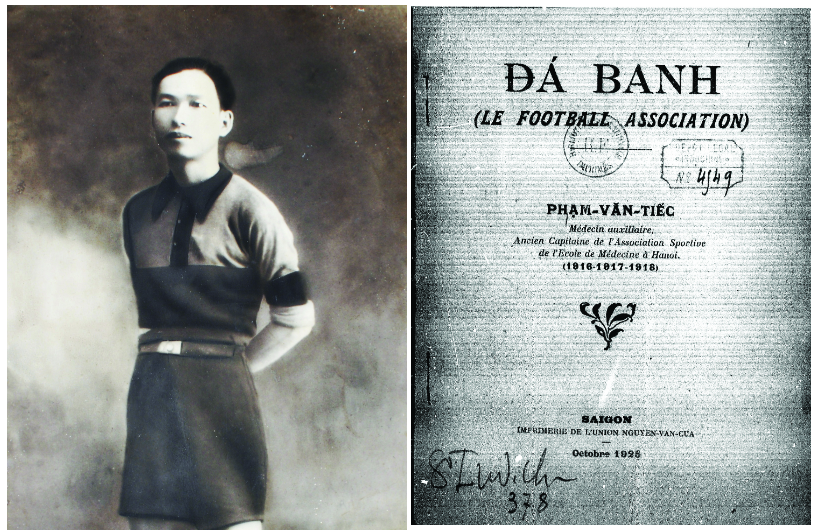 Doctor Pham Van Tiec is not only a one-of-a-kind Vietnamese who mastered both medical and football skills, but also the author behind arguably the country’s first-ever book about the ‘king of sports.’

The portrait of Tiec is painted vividly in the fourth installment of a series based on ‘Old Saigon,' written by Vietnamese writer Pham Cong Luan.

A med student who loved sports

In his piece about Pham Van Tiec, Luan recalls a day in the early 1990s when he visited a friend on Dien Bien Phu Street in District 3 – a villa with a wide courtyard, which the friend’s father had inherited from his uncle.

The friend then took Luan upstairs and pointed to a 50x60cm picture hanging on the wall, introducing it with “this is my granduncle, the owner of this house. He posed for this photograph when he was a member of the Étoile de Giadinh [Gia Dinh Star] football team in 1923.”

Luan was happy to be able to “see for the first time such a clear picture of the famed football squad,” he wrote.

The friend continued explaining that at the time of the photograph taken, his granduncle, Pham Van Tiec, had graduated from a medical university in Hanoi after six years and was working as a doctor in Saigon, moonlighting as a senior player of this renowned football team.

On the left side of the photo is a handwritten caption, reading “Winning the football championship of the Cochinchina 1922-1923,” and along the bottom edge is the names of those present in the picture.

The tournament was known in French as the Championat de Cochinchine, and the 1922-23 season was the first time ever the championship had been won by a Vietnamese squad, remembering that Vietnam was under French colonial rule between 1884 and 1945.

Luan said he was so impressed by the photo and the story behind Pham Van Tiec, a doctor and football star, that he decided to scour the history books and learn more about him.

To begin with, Luan learned through one of Tiec’s relatives that the doctor was born in 1895 in Vinh Te Commune in the old Chau Doc Province, now known as An Giang Province in the Mekong Delta.

After a childhood in his hometown, an 18-year-old Tiec left for Hanoi to attend the college now known as the Hanoi Medical University. He later married Ho Thi Hinh, born 1902, and had four children.

While it is unclear when Tiec took up football, there is proof that he had actively engaged in sporting activities prior to his graduation in 1918, according to Luan, the book’s writer.

“This may be the reason why he could easily participate in sporting activities when he moved to Saigon, particularly in football – the sport which was then played only by public officials, merchandisers and French soldiers,” Luan wrote.

After winning the Championat de Cochinchine, Tiec came up with the idea of writing a football guidebook, a work that eventually played a significant role in the development of the then-immature sport in Vietnam.

Luan managed to obtain a copy of a microfilm version of the book, titled simply 'Le Football Association,' from the National Library of France.

This is arguably the oldest document to share knowledge about football rules and techniques written in the Vietnamese language.

In the preface, Tiec said that he decided to compile the book after seeing that Vietnamese players had managed to be honored in such sports as cycling and badminton, but “as for football, there were no books to teach its rules or techniques.”

Tiec wrote that the French people had published many football books but the Vietnamese had little chance of accessing them.

“I am not going to show off my talent, but as a football supporter for more than a dozen years, being able to watch talented players and having learned useful techniques and strategies… I compile this book, consisting of a few chapters, only wishing that children will have an easy-to-understand book written in their mother tongue to begin learning how to play football,” Tiec humbly continued.

The book begins with a quick review of the history of football, with its roots in the UK, with the very first teams formed in 1836 and the rules being developed between 1871 and 1885.

Tiec went on to state that football was first introduced to southern Vietnam, then called Cochinchina, somewhere between 1905 and 1906. The sport was played at first only by the French, then Vietnamese people in Saigon followed suit, but it did not exist in any other province.

This means that football arrived in Vietnam quite early, at a time when the sport was still yet to become truly popular back in France.

According to Tiec, one of the strongest football teams in Saigon at the time was Giadinh Sport, which in 1922 merged with Étoile Bleue to become Étoile de Giadinh. The merged squad, full of talented players, won two Championnat de Cochinchine in 1917 and 1923.

Following the publication of the 11-chapter football guidebook, doctor Tiec continued to play football, earning more than half a dozen championships with Étoile de Giadinh, before relocating back to his hometown of Chau Doc in 1932.

According to family members’ accounts, Tiec was appointed director of the Chau Dau Hospital and worked there for a while, before opening his own clinic at his home in the town.

Before Tiec could hang any sign or banner for his clinic, patients knew where to come to see the doctor, as the whole town of Chau Doc at the time had only two doctors.

Pham Cong Luan found an ad for medicine for pregnant women in a copy of Phu Nu Tan Van newspaper in November 1932, which simply says that people should “come to Doctor Pham Van Tiec’s house” to get the drug, with no detailed address – an indication of how popular the doctor-and-footballer was at the time.

After 1975, Tiec evacuated back to Saigon when troops under Pol Pot's genocidal regime began crossing over the borders in southwestern Vietnam.

Tiec lived with his eldest son until taking his last breath in 1982. He was buried in Chau Doc in accordance with his will.

“The 1918-1932 period, when Tiec moved to and then left Saigon, marked a great contribution by the doctor to Vietnamese football,” Luan concluded.