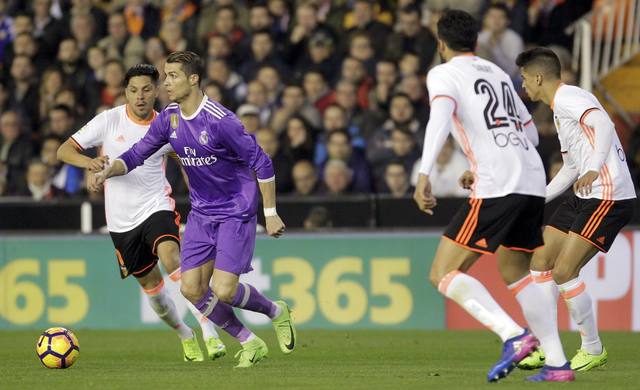 MADRID, Feb 27 - Real Madrid coach Zinedine Zidane threw caution to the wind as his side showed the capacity to handle adversity with a stirring late comeback to beat Villarreal 3-2 and stay top of La Liga on Sunday.

After Cedric Bakambu doubled Villarreal's lead in the second half, Zidane hauled off holding midfielder Casemiro for playmaker Isco and Real eventually emerged with all three points thanks to substitute Alvaro Morata's late header.

The pressure was on Real after Barcelona left it late to win 2-1 at Atletico Madrid and temporarily go top, while Sevilla had fought back to beat local rivals Real Betis 2-1 on Saturday and stay in a compelling three-way tilt for the Spanish title.

"We had to change something when the score was 2-0, that's what we did and it worked well because we weren't playing well, it was an attacking change which allowed us to play in our opponents' half," Zidane told reporters.

"We knew they'd cause us problems as they're so good at home and after they scored twice we had to be patient and play our game. Given what happened (earlier) today it was vital to get the three points and leave here as leaders."

Real lead the table with 55 points ahead of Barca on 54 and Sevilla with 52 plus a game in hand on their title rivals.

Gareth Bale and Cristiano Ronaldo, with a penalty, cancelled out goals by Bakambu and Manu Trigueros, though Villarreal were left stunned at the penalty decision as the ball bounced off the ground and struck captain Bruno Soriano on the arm.

"You can clearly see I couldn't have done anything, the ball bounced up towards my arm and I can't cut my arm off. It's a bounce and it's clear to me it wasn't a penalty," Bruno said.

Villarreal coach Fran Escriba and unused substitute Roberto Soldado were dismissed from the dugout for protesting and Escriba said the decision was not in line with the rules.

"I respect referees a lot but every year we are told that a rebound does not warrant a penalty for handball and he interpreted it another way," the coach said.

"We were doing well but after 2-2 we completely lost our focus and it was very difficult to get over that."

Villarreal suffered another setback when goalkeeper Sergio Asenjo tore a cruciate knee ligament after making a save to deny Karim Benzema and substitute Andres Fernandez was a less able replacement, allowing Morata's header to squeeze under his body.

"The players told me it was a penalty, I couldn't see it where I was but I'm never going to complain about referees," said Zidane.

"We did very good things in the second half, we were much better than in the first and in the end we've got three vital points for us," he added.