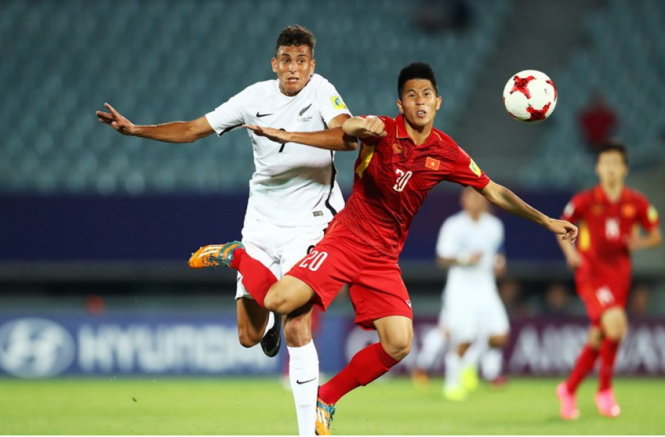 Vietnam could achieve positive results in their FIFA U-20 World Cup clash with France on Thursday, should the team play with the same vigor displayed in their draw against New Zealand in their group opener.

The second group-stage match will be broadcast live on VTV6 at 3:00 pm Vietnam time, with local supporters feeling upbeat about the Golden Stars’ performance in their country’s first-ever World Cup campaign, despite knowing defeat is unequivocal.

“We should accept that fact that the Vietnamese players need to allow as few goals against them as possible,” local coach Le Thuy Hai commented.

Hai added, however, that this view does not necessarily mean that Vietnam fans should have such a pessimistic outlook on their team’s World Cup campaign.

Vietnam drew 0-0 with New Zealand in the Group E opener on Monday, a match dominated by tournament first-timers. “This showed the world that Vietnam U-20s deserve their spot in the World Cup,” Hai said.

“No matter what the result of their clash with France will be, we should appreciate the young players for stunning the world with their performance in the Kiwi game. What they now need to do is continue to exhibit such a spirit in today’s game.”

According to local football analysts, Vietnam’s coach Hoang Anh Tuan is looking beyond the France match.

The leaders and second-placed teams of each of the six groups will advance to the round of 16, joined by the four best third-placed contenders.

Vietnam is looking to cash in on such an opportunity, with coach Tuan planning to bench his best players during the France match to keep them fresh for a decisive final group-stage game with Honduras this Sunday.