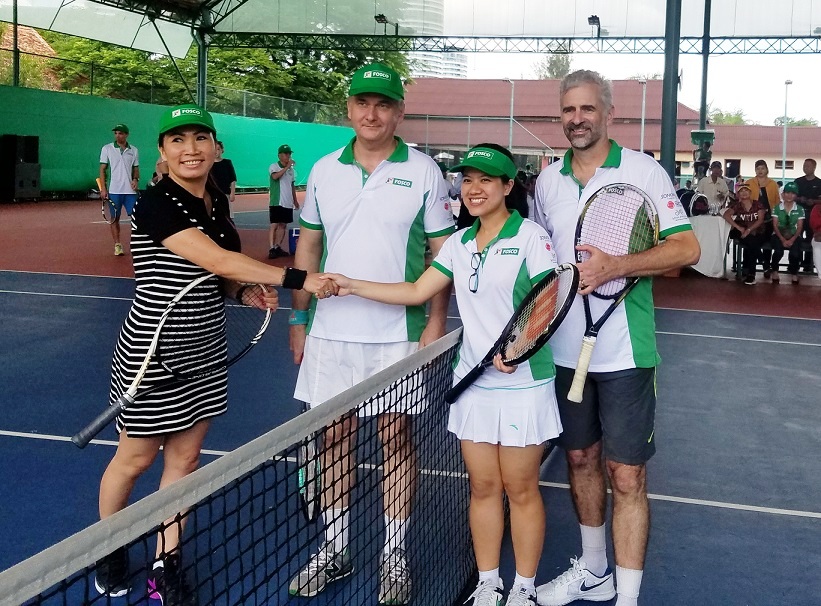 Foreign diplomats in Vietnam have had the chance to show off their skills at a tennis tournament exclusively organized for them on the weekend.

The 2017 FOSCO Tennis Tournament was held in Ho Chi Minh City on Saturday with the participation of 70 competitors, many of whom were officials and staff members of foreign consulates general in the southern hub.

The competition was organized by FOSCO, a state-owned company providing services for diplomatic agencies and international organizations’ offices in Vietnam.

Wiping his sweat after a tennis match during a scorching afternoon, Dmitry Alekseev, Deputy Consul General of Russia in Ho Chi Minh City, rested on the bench with a broad smile on his face.

Alekseev worked in Hanoi from 1990 to 1993 before arriving in Ho Chi Minh City about one and a half year ago.

Vietnam has become the second home of the Russian diplomat as he has well adapted to the local lifestyle.

“I grew up in Moscow, which is very cold. I don’t like cold weather. I could not even stand the chilly atmosphere in Hanoi, which is why living, working, and playing sports in Ho Chi Minh City do not create any problem for me,” Alekseev said in Vietnamese.

The foreigner plays tennis two to three times a week at a local sports center and goes swimming in his free time.

Richard Bale, Consul General of Canada in Ho Chi Minh City, got along very well with his Vietnamese teammates at the tournament, despite the language barrier.

The 61-year-old diplomat started working in Vietnam in 2015, having no trouble adapting to the life in a new country thanks to his previous experience working in Pakistan, Indonesian, the Philippines, and others.

Bale could only run or play snowboarding in his home country due to the weather, he said.

The Canadian man took up tennis when he was in Pakistan, he said, adding that he has frequently played the sport since he came to Vietnam.

People in Vietnam play sports as a way to meet new friends, which is very interesting to the foreigner as it is often about competing in Canada, according to Bale.

The consul general signed up for games for doubles at the tennis tournament, competing alongside a Vietnamese female partner.

The duo showcased excellent skills and coordination, which left quite an impression at the sports event.

According to Nguyen Truong Minh, head of the organizing committee, the tournament was initiated last year with some 40 competitors.

It is designed as a playground for foreign sport lovers in Vietnam, especially those working in the diplomatic sector.

“We had conducted a survey and noticed that the majority of foreign diplomats in Ho Chi Minh City play tennis as their regular sport,” Minh said.