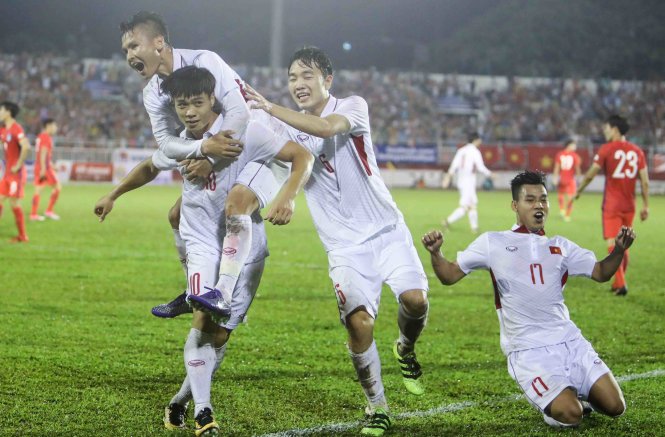 ​Vietnam grouped with S. Korea, Australia at 2018 U-23 Asian Championship

Vietnam’s journey at the 2018 AFC U-23 Championship in China is a tough one, having been drawn in the same group as South Korea, Australia and Syria.

Sixteen teams were drawn into four groups during a ceremony on Tuesday, with Vietnam given little chance of advancing by local pundits.

The 2018 AFC U-23 Championship, also known as the 2018 AFC U-23 Asian Cup, is the third edition of the biennial under age international football championship organized by the Asian Football Confederation (AFC) for Asia’s Under-23 men's national teams.

It is scheduled for January 9 to 27 in China next year.

“While being able to represent at the tournament is already an achievement for Vietnam, we should accept the fact that this is an arena too big for us,” local coach Le Thuy Hai told Tuoi Tre (Youth) newspaper shortly after the draw was announced.

Hai said it was not pessimistic to say that the Golden Stars would not advance from the group stage at the tournament.

“To be honest, I don’t think they will make it because the other Group D contenders are too strong,” Hai said.

“Syria, South Korea and Australia are all adept at the modern game. It’s a challenge for Vietnamese players to fight for the ball with them, given our players’ modest physiques.”

Earlier this month the Vietnam Football Federation appointed South Korean Park Hang-Seo head coach of both the national and U-23 teams, following the latter team’s failure to medal at the 2017 SEA Games in Kuala Lumpur.

Vietnam now has three months to prepare for the championships in China, which Hai said was “a long enough window for new coach Park to give Vietnam’s U23s a ‘facelift’.”

Another local coach, Doan Minh Xuong, said he also believed that Vietnam should consider the upcoming championship a chance to learn from the region’s strongest teams.

Vietnam secured a berth at the 2018 AFC U-23 Championships as Group I runners-up during their qualification tournament in July.

The tournament will be Vietnam’s second appearance at the AFC U-23 Championship after failing to make it beyond the group stage during their debut at the 2016 tournament in Qatar.