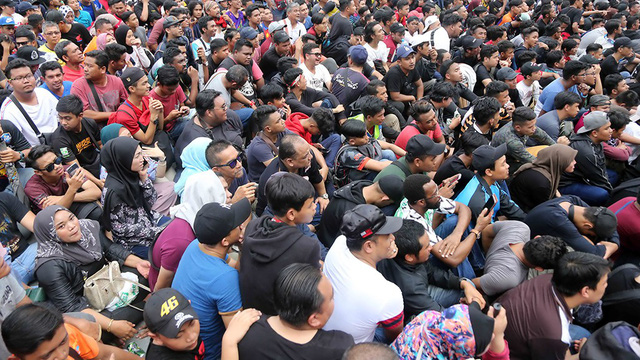 Buying ASEAN final tickets not a walk in the park for both M’sian, Vietnamese fans

Whether fans went to the brick and mortar booths or visited online booking sites, tickets for the 2018 AFF Championship first-leg final between Malaysia and Vietnam was not as easy to buy as candy for supporters of both teams.

Malaysia will host Vietnam in the first-leg game of the tournament decider in Kuala Lumpur this Tuesday, December 11, with ticket sales available at the Bukit Jalil National Stadium over the weekend.

In the meantime, the Vietnam Football Federation began selling tickets for the December 15 return game in Hanoi from Monday morning.

A ticket rush during the AFF Championship might be something normal in Vietnam, but it is an unusual phenomenon for the Malaysians.

More than 1,000 supporters of the Malayan Tigers had to queue overnight in front of the Bukit Jalil National Stadium, while Vietnamese fans failed to buy online tickets as the VFF websites were down shortly after sales were open.

Rush at brick and mortar booths

The supporters waiting in front of the 87,000-seat Bukit Jalil Stadium on Sunday morning were those who failed to buy tickets during the online sales that started on Friday by the Football Association of Malaysia (FAM).

While the FAM had expected to sell 40,000 tickets via the Internet in two days, they were in fact sold out in just a few hours.

As a result, more than 1,000 Malaysian people queued up overnight at their national stadium to be able to buy the 40,000 tickets allocated for sale at this place.

They sat, lay, and slept alongside the fence of the Bukit Jalil Stadium since 6:00 pm on Saturday (Malaysian time). A number of unlucky fans were eventually told to just forget about the tickets.

Ticket sales reportedly had to be delayed from 9:00 am to 10:00 am on Sunday for more security reinforcement, as the crowds were so big, threatening the safety in front of the ticket counters A and E.

“I and my friends lined up since 7:00 am, but are now still this far from the ticket booths,” Yen Nhi, a Vietnamese supporter working for a barbershop a 30 minute drive from Kuala Lumpur, told a Tuoi Tre (Youth) newspaper reporter at the scene.

“It’s horrible,” Nhi said as the fans started to yell upon the delay of the ticket sale opening.

The scenario became chaotic when the ticket counters opened with people storming into the limited space and pushing each other in the helplessness of FAM employees.

The situation was worsened as several people, men and women, fainted before they could reach the ticket booths. Unconscious children were passed through the hands of the crowd in the air.

The sufferers were all rushed to two ambulances waiting at the gates of the two ticket counters for immediate treatment.

But that was not enough to stop the chaos, which even got worse as the ticket counters closed after only 15 minutes.

Hot-tempered fans in the front hit on the doors of the ticket booths while people behind threw bottles of water towards the counters, making it difficult for police and security officers to return order.

The ticket counters then opened and closed again within one hour, with the stadium organizers announcing that the 40,000 tickets were sold out.

Right at that moment, those who still failed to buy a ticket started to throw everything in their hands to the front.

“Everything was terrible. We queued from 8:00 am and they told us tickets were sold out around 12:00 pm. It doesn’t make sense,” Mohd Aidrul Radzie, a 23-year-old Malaysian supporter, told Tuoi Tre.

In Vietnam, the VFF decided to sell only 10,300 tickets for the second-leg final at the 40,000-seat My Dinh National Stadium in Hanoi on December 15 through the Internet, but did not disclosed how the remaining tickets would be distributed, according to news site Zing.vn.

On November 28 and 29, the VFF angered fans as the online ticketing system for the second-leg semifinal between Vietnam and the Philippines at My Dinh was quickly ‘paralyzed’ only a few seconds after sales started.

Monday morning’s ticket sale was not any better, and the same issues associated with the poor capacity of the VFF websites would only reoccur, even though the federation said it has learned from the past experience.

Though fans eagerly visited VFF websites on Monday morning, few were able to make a purchase.

Even when the site was successfully loaded, another message would greet visitors if they tried to process the purchase, saying, “The system is currently busy. Please come back after a few minutes. We’re very sorry for this inconvenience.”

Then, when the customers managed to pick a price tier, a message would pop up for each of the four available price tiers, telling them all tickets of this price tier have been sold out, although the system had shown the availability of the tickets before that.

VFF’s online ticketing system is operated by CMO-Z.com Runsystem Corporation. A VFF’s representative once advertised it as one of the most prestigious businesses of its kind in Japan.