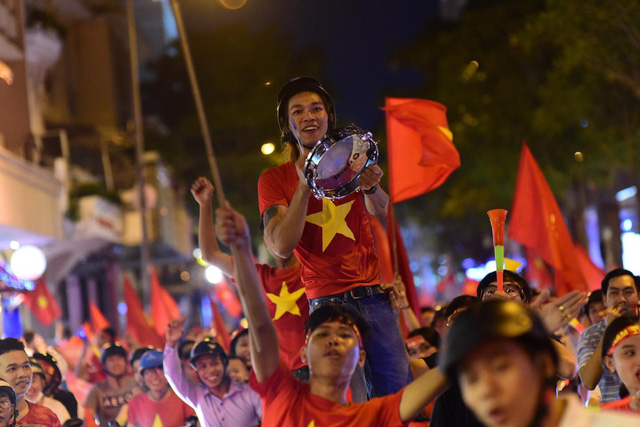 Major streets of Hanoi, Ho Chi Minh City and virtually any localities across Vietnam have once again been a sea of red on Saturday night as the national football team won the Asean Football Federation Championship for the first time since 2008.

The Golden Stars beat Malaysia 1-0 in the second leg of the final on their home turf in Hanoi with a brilliant volley by Nguyen Anh Duc, securing a 3-2 aggregate triumph to win the regional title, exactly ten years after their first trophy in 2008.

As Vietnam is known for celebrating any victories of their beloved football team, Saturday’s feat has unsurprisingly sparked nationwide celebrations.

An audio-visual feast, with the red color seen everywhere and the space filled with the bizarre sound sound of vuvuzela-like horns, was simultaneously held across the country shortly after the last whistle of the Vietnam - Malaysia clash at the 40,000-seat My Dinh National Stadium was blown at round 9:30 pm.

This is what known as di bao, literally translated as “going like a storm,” in Vietnamese.

On Saturday night, people, with national flags in their hands and flag- or heart-themed stickers glued on their cheeks and foreheads, flooded main streets in big cities and provinces countrywide, shouting in triumph.

Some blew their horns while others enthusiastically beat their ‘drums,’ which were in fact pots and pans.

Below are photos of the celebrations taken by Tuoi Tre (Youth) newspaper: