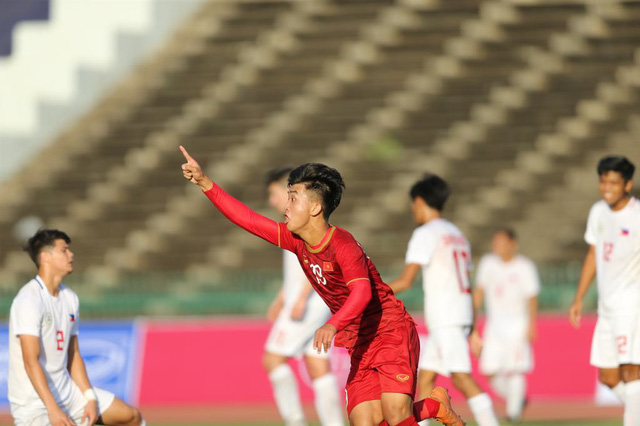 Vietnam staged a comeback to defeat the Philippines in Cambodia on Sunday to earn the first three point at the AFF U-22 LG Cup 2019.

The young Golden Dragons dominated their group-stage opener on artificial turf in Phnom Penh, where they missed many chances before conceding a goal in the first half.

But two goals in the second half following two substitutions secured the Vietnamese their first 2-1 win at the Southeast Asian tourney.

The junior Azkals punished Vietnam in the 51st minute, when midfielder Borlongan curled the ball into the net from a set piece just outside the box.

The young Vietnamese then launched multiple attacks in vain before Tran Danh Trung and Le Minh Binh were fielded.

It was the two substitutes who netted the equalizer and winner to earn three points for Vietnam.

Le Van Xuan dashed past a bunch of Filipino defenders before his cross found Trung, who scored with a left-footed shot in the box in the 74th minute.

Binh slot home from a corner four minutes later to seal the game.

Vietnam will play Timor-Leste on Tuesday prior to their clash with archrivals Thailand in Group A two days later.

The other group includes hosts Cambodia, Myanmar, Malaysia, and Indonesia.