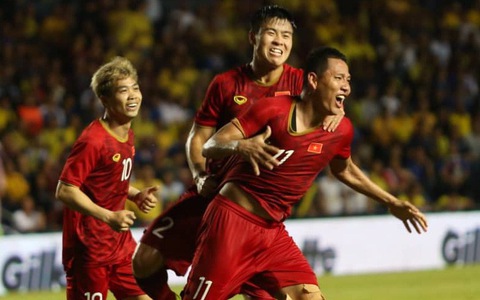 Vietnam grabbed a late win against Thailand with a header in stoppage time on the Thai turf on Wednesday to book their spot against Curacao in the final match of the King's Cup 2019.

The teams played a battle of high tension, highlighted by violence, rows and five yellow cards, during 90 minutes, before veteran Vietnamese striker Anh Duc scored the decisive header four minutes into the second half's injury time from a corner by Xuan Truong.

It was a costly error goalkeeper Kawin Thamsatchanan would never forget. The Thai goalie almost managed to save the firm header from Duc, but the ball only ballooned off his hand and bounced straight back down, bobbling over the line.

Duc, 34, first played for Vietnam’s national team in 2006. His late goal left no chance for the hosts to equalize, as the final whistle was blown shortly thereafter.

Curacao beat India 3-1 in the other game earlier on Wednesday.

This means Vietnam, which won the 2018 ASEAN Football Federation Championship, will play the King’s Cup final game with Curacao, while Thailand and India will compete for the third place on Saturday.

King’s Cup is a four-team international competition held annually by the Thai football association since 1968.