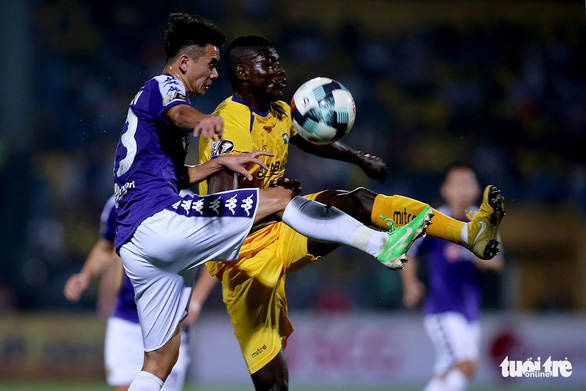 Hanoi FC have clinched their fifth league title two rounds early following a minimal victory in an away game on Thursday.

The Capital Team and Song Lam Nghe An (SLNA) clashed in the 24th round of the 14-team V-League 1 at Vinh Stadium in Nghe An Province.

Hanoi eyed an early title while SLNA targeted a third place but both sides played very cautiously during the game.

Injuries prevented the two clubs from fielding their best players so they could not deliver a captivating performance as expected by their supporters. No goal was scored in the first half.

Hanoi could have waited another round to clinch the title, as SLNA’s Khac Ngoc curled the ball to hit the post when goalie Nguyen Van Cong was rooted to the ground in the 89th minute.

The Capital Team won the championship two rounds early with 52 points, while SLNA could lose the third-place race because of this loss.

Ho Chi Minh City FC are trailing Hanoi with 45 points, following by Than Quang Ninh with 35 points and SLNA with 33 points.

The club will encounter North Korea’s April 25 Sports Club at Hang Day Stadium on September 25 and at Yanggakdo Stadium in Pyongyang on October 2 in the inter-zone play-off final of the AFC Cup.