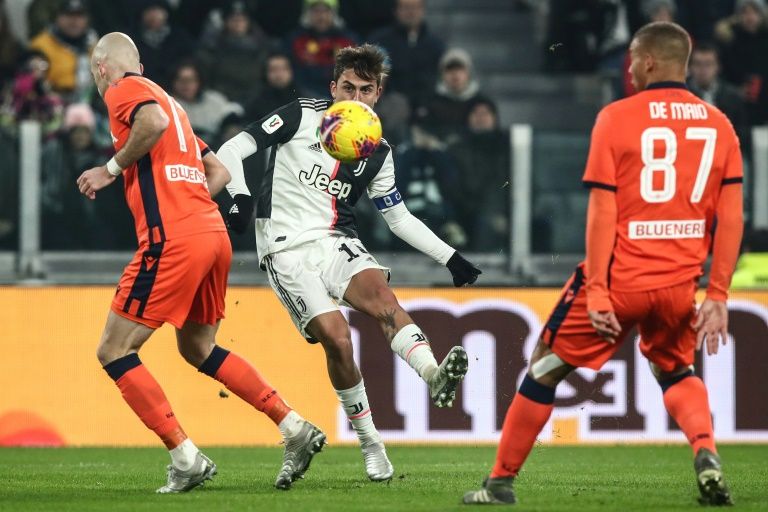 Milan -- Cristiano Ronaldo was too ill to play, while Zlatan Ibrahimovic spent the evening resting on the bench, but even without their biggest stars, Juventus and AC Milan cruised into the last eight of the Italian Cup on Wednesday.

Juventus beat visiting Udinese 4-0 in the late game, after Milan had dispatched SPAL, 3-0.

In the first game of the evening, 10-man Fiorentina beat Atalanta 2-1.

Ronaldo was sidelined after suffering an attack of sinusitis in the afternoon, but he is not the only ace in the Juventus pack.

After 16 minutes, Paulo Dybala carved through Udinese with a series of quick one-twos, finishing with a couple of exchanges with centre forward Gonzalo Higuain.

When his Argentine compatriot played a pass one little behind him, Dybala spun and floated the ball onto Higuain's chest and he strode forward and scored.

Dybala scored a in the 58th minute, clipping the ball over Nicolas from the right edge of the box. Two minutes later Douglas Costa converted Juve's second penalty after Bram Nuytinck handled.

In Milan, Krzysztof Piatek, who is reportedly on the verge of a move to Tottenham Hotspur, outpaced the sluggish SPAL offside trap to give the home team the lead after 20 minutes.

Samuel Castillejo curled a precise left-foot shot inside the far post just before half time.

Fullback Theo Hernandez added a third in the 66th minute, surging upfield and smashing home a left-foot shot from just outside the penalty area.

Patrick Cutrone also scored his first goal for the club when he put Fiorentina ahead in the 11th minute of his first start since arriving on loan from Wolverhampton Wanderers last week.

The away side scored a deserved leveller when former Fiorentina man Ilicic turned in a superb Ruslan Malinovskiy cross.

But Lirola won the tie to set up a tough match with Serie A title chasers Inter Milan. The winner of that clash face either Lazio or Napoli in the semifinals.

Holders Lazio, who are on a club-record run of 10 straight wins in Serie A, made short work of Cremonese in their 4-0 victory in Rome.

Troubled Napoli eased into the quarters with a 2-0 win over Perugia thanks to two Lorenzo Insigne penalties.

In the last eight, AC Milan will face Torino who beat Genoa on penalties last week.

Juventus will play the winner of the last tie of the round, Roma at Parma on Thursday.