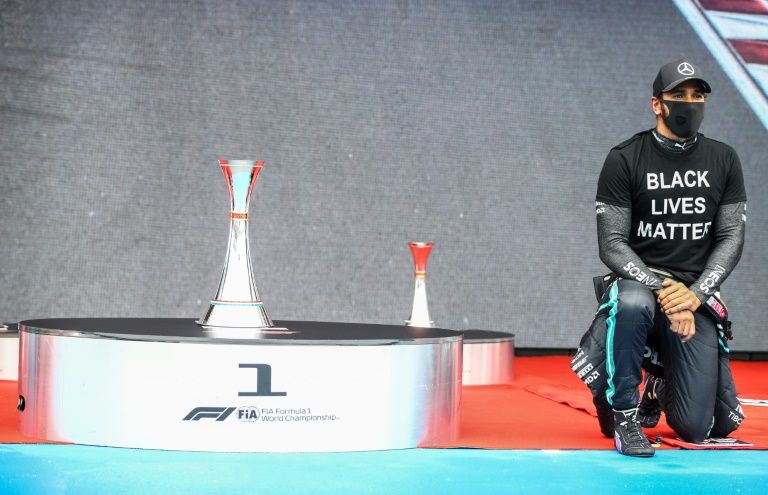 BUDAPEST — Lewis Hamilton intends to write to Formula One’s bosses in a bid to create a more co-ordinated anti-racism stance and improve the sport’s pre-race 'taking a knee' ceremony.

Speaking at the Hungaroring after his classic drive to a hat-trick of victories at Sunday’s Hungarian Grand Prix, the six-time champion said he will write an email to urge them to improve communications and do a better job.

"I think they can give us more time,” he said, referring to Sunday’s shambolic and rushed pre-race gesture by a group of drivers.

“So, I’ll probably send an email over the next couple of days -- and try and co-ordinate with them to create a better way.

"They do want to do it…. I guess there’s not good enough communication.”

Hamilton revealed that there were clear rifts among the drivers and a lack of planning for the ceremony that is now a part of many other major sports events.

He said that the shambolic and rushed ceremony that took place ahead of Sunday’s race was not mentioned in the official drivers’ briefing meeting and said the chairman of the Grand Prix Drivers Association (GPDA) Romain Grosjean did not believe it was necessary.

He is expected to make contact with Formula One’s chief executive Chase Carey, who has donated one million dollars of his own money to the sport’s battle for diversity and against racism, and the president of the ruling body, the International Motoring Federation (FIA).

Hamilton made clear his disappointment and frustration at F1’s failings in presenting a united front by the drivers in the anti-racism drive.

On Sunday, a cluster of drivers took the knee in parc fermee in the pit-lane, but several arrived late, some stood and some did not turn up at all.

Hamilton said: “He (Grosjean) doesn’t think it’s important to do it – he’s one of them that thinks it was done once and that’s all we need to do….

“So I tried to speak to him about what the problem is, that it’s not going away and we have to continue to fight for it. I think this time he didn’t mention anything in the drivers’ briefing and neither did Sebastian (Vettel, also a director of the GPDA).

“Sebastian and I messaged each other and he stressed, as did I, the importance that we continue to do it."

He added that the sport lacked leadership on the issues.

“From the top, they need to come out with ‘hey, this is what we're going to do guys and we want you all to be a part of it'. Currently there is none of that.

“I try not to lean so much on the drivers because I don't want them to feel it's me that's doing it – and because, in some places, that might be why some are not doing it … because it's why I'm doing it.

“But I don't think it's being taken seriously. I think there are perhaps people who have not grown up around it so they don't understand it.

“And there are those that say 'because of that it doesn't affect me'. I have heard those comments - 'It doesn't do anything for me, so why should I do it?'

“It's not about me, it's not about you. There are people out there who are experiencing discrimination, that's what we're fighting for -- we're trying to change in organizations.

“I’ll get in touch with Formula 1 this week. I will speak to Jean (Todt) because no-one else is going to do it."

Hamilton hopes that all 19 drivers will agree to kneel with him by the end of the season.

"I gave a lot of energy in Austria to try and convince a couple of the drivers, and it’s a battle, but I think what’s important is the ones that are doing it, the understanding, it’s fantastic.

“My dream is that one day the other drivers come around to it, and if we get to the last race and we’re all kneeling down and showing that we are united, I think that would be beautiful.”