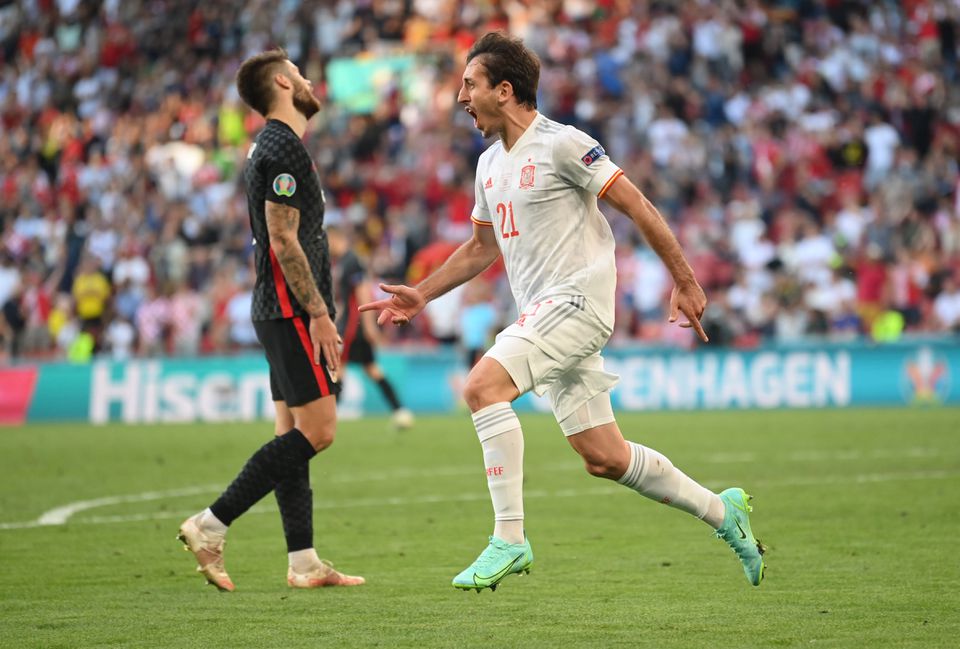 Spain striker Alvaro Morata answered vicious criticism by helping fire his side to a 5-3 win over Croatia after extra time on Monday to reach the quarter-finals of Euro 2020 in a breathless match laced with storylines.

In the best game of the tournament so far, Spain fell behind in the first half to a Pedri own goal from near the halfway line after keeper Unai Simon let a backpass bobble past him.

But the three-times European champions recovered their poise and looked en route to a comfortable victory with goals from Pablo Sarabia, Cesar Azpilicueta and Ferran Torres.

Showing the spirit that took them to the last World Cup final, Croatia staged an astonishing comeback with goals from Mislav Orsic in the 85th minute and a Mario Pasalic header in added time to force the extra period.

Luis Enrique's side showed tremendous character though and prevailed with Morata's superb strike in the 100th minute and a goal from Mikel Oyarzabal in the 103rd.

Spain celebrated a first knockout win in a major tournament since winning Euro 2012 to set up a quarter-final against France or Switzerland in St Petersburg on Friday.

"It was an epic game," said Luis Enrique.

"I've experienced many intense games in my career but this was one of the best. An infinite number of things happened to us but we knew how to turn things around. Everyone saw our true team spirit today."

Goalscorer Azpilicueta added: "We suffered so much, it has been such a long time since we have won a knockout match and we managed to finally do it against the World Cup runners up."

Captain Sergio Busquets also praised his side's mentality and defended Simon, who compensated for his first-half calamity with a superb save to thwart Andrej Kramaric and stop Croatia taking the lead early in extra-time.

"Unai knows he's got our total confidence. The goal was bad luck but he has a cool head on him and is ambitious and he showed that today. He was ultra-secure after the goal and made some top saves," Busquets said.

"When Croatia changed their system, they flooded the pitch high up and we didn't adjust quickly enough. But overall I'm so happy with the result, how we handled the extra time and the fact that we are in the quarter-finals."

Croatia head home with their heads held high but are still waiting to win a knockout game at a Euros.

"At the start of extra-time we had them on the ropes but we failed to score from two good chances. Then the game turned around and we didn’t have the strength to come back," said midfielder Luka Modric.

Coach Zlatko Dalic added: "We did everything we could, brought it back to 3-3, had some chances, but we couldn't win it in the end."

Morata has been the centre of attention of Spain's campaign amid inconsistent performances and criticism from his own supporters, which took an ugly turn during last week's 5-0 win over Slovakia.

His wife and children were threatened by supporters in Seville and he complained of facing death threats before the game, prompting coach Luis Enrique to urge police action.

The striker has long struggled for consistency in front of goal in a career which has taken him to Real Madrid, Chelsea, Atletico Madrid and Juventus, while he has been accused by former coaches and team mates of having a fragile disposition.

But here he showed steel when Spain's confidence was on the floor, controlling a Dani Olmo cross with one foot before blasting into the roof of the net to put Spain back in front.

Substitute Oyarzabal struck moments later from another Olmo cross to increase Spain's lead and this time Croatia had no response.

The result made them the first side in a Euros to score five or more goals in consecutive matches, with Morata joining Fernando Torres as his nation's joint highest scorer in the competition on five goals.

Pedri earned an unwanted record: his own goal from 49 yards was the longest own goal in a Euros and the tournament's first ever from outside the box.