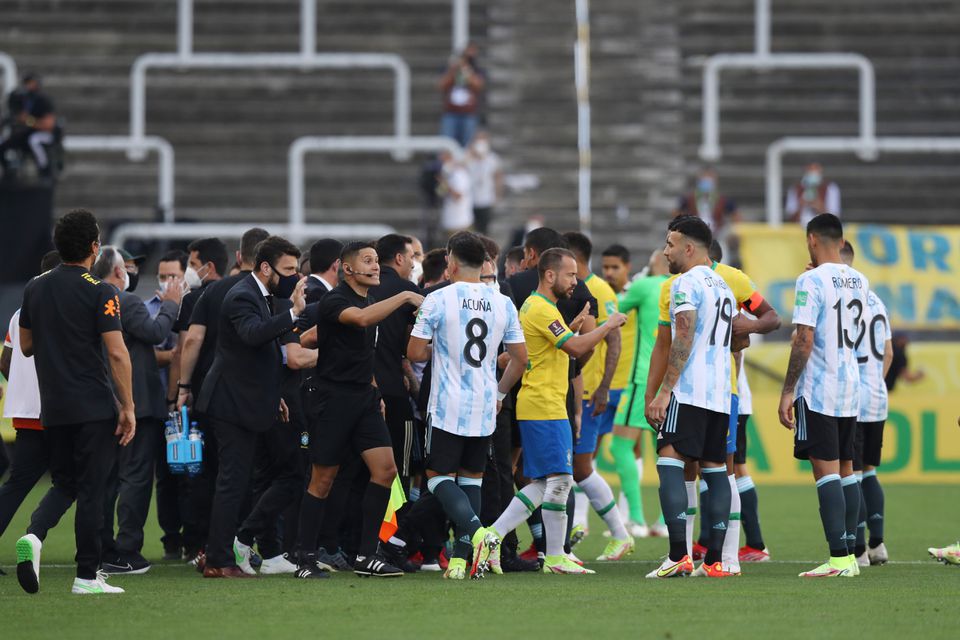 SAO PAULO -- A World Cup qualifier between Argentina and Brazil was suspended amid farcical scenes on Sunday after Brazilian health authorities accused a number of Premier League players of violating the country's COVID-19 quarantine rules.

Aston Villa goalkeeper Emiliano Martinez and Tottenham duo Cristian Romero and Giovani Lo Celso were on the Neo Quimica Arena pitch as part of the Argentine line-up when officials from Brazil's health regulator Anvisa invaded the pitch and stopped the game around five minutes after kickoff.

The trio, along with Aston Villa’s Emiliano Buendia, who was in the stands, had reportedly breached Brazilian rules stating that travellers who have been in the UK, South Africa or India during the previous 14 days are forbidden from entering the country, unless they are Brazilian citizens or have permanent residency.

The regulations were put in place to control the spread of COVID-19, which has killed more than 583,000 Brazilians.

While the visitingteam quickly left the field, the two coaches, along with Argentina captain Lionel Messi and the Brazilian players, gathered at the side of the pitch to discuss the stoppage.

"Why did they start the game and stop it after five minutes?" Messi said in comments heard on television. "We've been here at the stadium for an hour, they could have told us."

Messi then returned to the dressing room and at 5pm local time, an hour after the game kicked off, the match was officially suspended.

“The referee and the match official will take a report to the FIFA Disciplinary Committee and they will decide what steps to take,” said a statement issued by the South American Football Confederation (CONMEBOL).

Anvisa said they had issued ample warnings that the four Argentines were in contravention of Brazilian health regulations.

Argentine officials were told on Saturday the four should isolate and when the instructions were ignored, Anvisa asked Brazilian federal police to enforce the isolation ruling on Sunday morning, the regulator said.

Their attempts were "frustrated," Anvisa said in a statement issued late on Sunday.

Brazilian Football Confederation president said he was “indignant” with the scenes that reverberated around the football world.

Ednaldo Rodrigues criticised Anvisa and said officials told him the Argentines who breached the country's COVID-19 rules could have been deported after the game.

“I feel sorry for all the sports fans who wanted to watch the game on television,” he told Brazil’s Sportv. “With all due respect to Anvisa, they could have resolved this earlier and not waited for the game to start.”

“It makes me so sad, I am not looking for guilty parties, whatever happened or didn’t happen, this wasn’t the time to do it,” he told Argentine broadcaster TyC Sports.

“We wanted to enjoy a game between the best in the world and it ends up like this.”

“As a coach I am going to defend my players. If people come and say we want to take this guy or deport this guy there was no chance of that," he said. "Because at no time were we told we couldn't play the game."

Argentine officials believed the same protocols used in the Copa America in Brazil in June were in place for the World Cup qualifiers to allow teams to travel across the continent. CONMEBOL confirmed that interpretation.

In a statement Anvisa said it had received reports that the four Argentine players had provided “false information” on their pre-flight health declarations.

"Anvisa considers the situation a serious health risk and so has asked local health authorities to determine the immediate quarantine of the players, who are stopped from participating in any activity and should be prevented from remaining on Brazilian soil," Anvisa said in a statement.

The confusion comes amid continuing anger in South America at rules which have robbed several teams of key players for this month’s three World Cup qualifiers.

Brazil were without nine key men for Argentina game, and other South American sides have also lost players due to a decision by some European clubs not to let their players travel to the continent.

They would have had to quarantine when they returned to Europe and the clubs do not want to lose their players for subsequent league games.